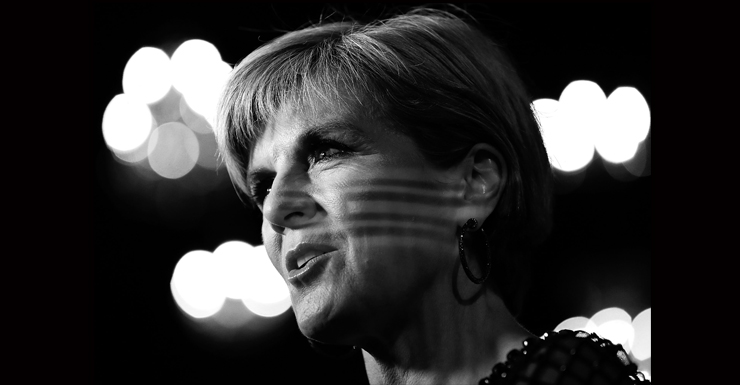 Foreign Minister Julie Bishop publicly declared her personal opinion for the first time on Monday night, while still hedging for her conservative constituency.

“I have absolutely no concerns about it myself, but I know there are a lot of people who are deeply concerned about the issue,” Ms Bishop told Channel Ten’s The Project.

The deputy leader backed a public vote on the issue, which is the current policy of her party.

She said she supported Australians having their say on “such a fundamental issue” through a plebiscite.

“I think the Australian people should have their say.”

Ms Bishop had previously declined to comment on her personal views on same-sex marriage — an issue she described in the interview as “going to the very heart of our community”.

The Minister also said the mood of the nation had changed “for the better” under new PM Malcolm Turnbull.

“He’s very positive, very upbeat, half-glass full and I think the narrative in the country has changed for the better.”

The government has hinted, through interviews with cabinet frontbenchers, that the gay marriage plebiscite will occur some time after the 2016 election.

Australian Marriage Equality’s Rodney Croome said her support was “quite significant”, given her influence and popularity.

“It will mean other members of the Liberal Party will be more likely to vote in favour,” he told ABC radio on Tuesday.

“I think if it’s put to the people, then we’ll see more Australians in support of the reform because of the support of Ms Bishop.”

-reporting by Jackson Stiles and AAP