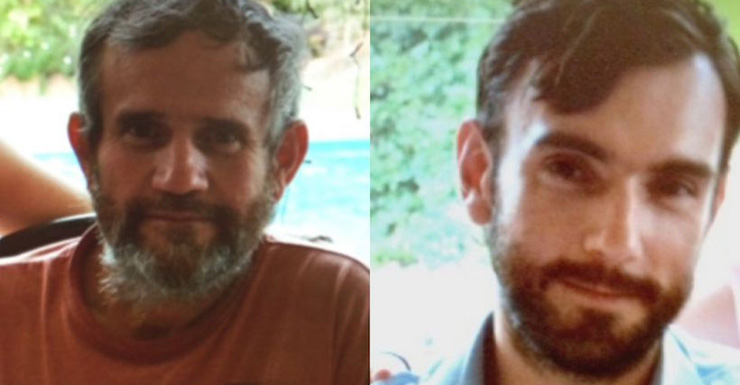 You really have to hand it to those Stoccos.

Sure, they’ve (allegedly) taken some shots at police near Wagga Wagga and have been arrested over for a string of alleged offences, including attempted murder, but these two have redefined the possibilities of father-son relationships.

It seems as though the Stoccos, father Gino and son Mark, have spent much of the past 12 years in each other’s pockets.

• Police plea on missing pair
• Stoccos likely to be ‘running out of money’
• Hunt for armed father, son fugitives continues

Whether they were performing burglaries, cruising on yachts, working as farmhands or serving in the clink – this is a relationship that knows how to go the distance.

One wonders what these two talked about on those quiet nights out at Canowindra, Coolatai or, more recently, Yea, after the can of Heinz beans had been devoured and they were onto a mug of billy tea.

Gino: Ahhh… The starry heavens above me and the moral law within me.

Mark: I didn’t know you were a Nick Cave fan, dad.

Mark: Is your moral law starting to think we should turn ourselves in?

Gino: Out of the crooked timber of humanity, no straight thing was ever made.

Mark: Do we have any more beans?

I love my dad dearly, but I’m not sure how we’d go on the run for a couple of hours after we’d exhausted all our football conversation.

We might stray into films, then books, but after that we’d be pretty much cooked.

Perhaps the Stoccos even discussed their feelings in all that time on the road (click the red dots on the graphic below for details of their escapades).

Special credit must go to Mark.

At 35, obviously not tied down, Mark’s love of spending time with his dad really is something to behold.

Faced with the prospect of five years in a maximum security facility or camping out in the bush with my old man for the rest of my days, I’m taking the jail time.

That isn’t purely because I fear I’d have nothing to talk about with my dad – it’s also because I don’t like sun, or flies, or any kind of physical hardship.

Modern living can take a toll on family, so these two really do deserve some kind of award for keeping it together.

Gino is a master economist – teaching Mark how to really stretch a dollar in the local supermarket.

Even police are impressed by the duo – Wagga Wagga superintendent Bob Noble hailing their “level of organisation”.

“They work in a team, obviously. There’s a high trust model. ”

Again, this is revolutionary behaviour.

In most father-son combinations I know, the mere matter of who gets to hold the barbecue tongs is recipe for a slanging match.

Now, it’s time to serve your penance (if it’s deemed you need to) and share with us your gifts on building more meaningful father-son relationships. ‘I am not afraid’: The modern unknown soldier risks it all in Ukraine
Greens sign up for Labor’s looming jobs-and-skills summit as Liberals stick with boycott
Joe Biden’s $430b green victory for the environment
China cementing its Thailand ties with joint military exercises
NRL: Titans frantic to end 10-game losing streak as Manly showdown looms
AFL: Western Bulldogs cling to finals hopes after GWS thriller
Why nuclear could be Australia’s energy future
Today's Stories

What we can learn from the Stoccos