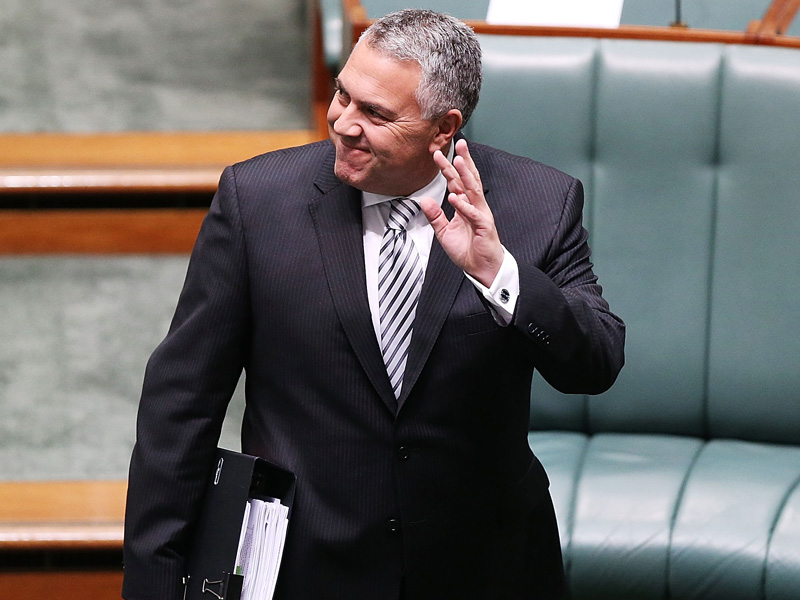 Some say the MYEFO harks back to Mr Hockey's doomed days. Photo: Getty

Joe Hockey has been labelled a “double-dipper” and called on to reject his $90,000-a-year parliamentary pension while he collects a $360,000 a year in wages if he is appointed as ambassador to the United States.

Just days after saying in his farewell speech to parliament that Australians should “live within our means” to end “the age of entitlement”, it was revealed that Mr Hockey’s taxpayer-funded income could top $450,000 a year, substantially more than he earned as Treasurer.

On Sunday, independent senator Nick Xenophon said he wanted to help the former Treasurer achieve his aspiration of ending the age of entitlement by saying no to his pension.

• Hockey thanks ‘beloved’ Libs in farewell speech to parliament
• It wasn’t meant to end this way: Joe’s bitter goodbye
• PM pushes on with loathed Abbott cuts

“I just want to help Joe Hockey fulfil his dream of ending the age of entitlement by Joe Hockey setting an example for the rest of us,” Mr Xenophon said.

Senator Xenophon told reporters that if Mr Hockey doesn’t co-operate, he would draft a bill to stop politicians collecting their pensions while taking up diplomatic posts. At present, Mr Hockey would be entitled to both the pension and the ambassador’s salary.

According to rules enacted in 2010, the former Treasurer is entitled to 50 per cent of his parliamentary pension should he take a diplomatic posting – for Mr Hockey this would be a reported $90,000 per year.

Mr Hockey and his wife Melissa Babbage enjoy a reported net personal wealth of more than $10 million, thanks to owning various multi-million-dollar properties.

During his valedictory speech to the House of Representatives on Thursday, Mr Hockey claimed his “age of entitlement” speech in London in April 2012 was arguably the most influential Australian political speech in 20 years.

“Both our superannuation system and our age pension entitlements must be calibrated for our changing demographics,” Mr Hockey said during his farewell.

“We need a comprehensive and bipartisan review followed by action in this area and we need the infrastructure to support the change in demographics.

“Because, we are running deficits and borrowing money, our lifestyle today is being paid for by our children and generations beyond.”

He claimed his controversial budget measures like the Medicare co-payment, waiting times for the dole and cuts to family tax benefits were the right policies, but he admitted to getting the politics wrong.

“I would always prefer to do what was right than what was popular … Intergenerational theft and betrayal is not the Australian way,” he said.

“We need co-payments in health, greater cost recovery in education, and universal means testing in welfare.”

Mr Xenophon, who said Mr Hockey should not “double dip” from taxpayers with a pension and a diplomatic post salary, has long been a critic of the system of entitlements politicians are afforded.

The Abbott government came under fire earlier this year when it planned to stop parents “double dipping” from government and work-funded paid parental leave.

In an interview, Mr Hockey described this as “basically fraud”.

While in office, Mr Hockey made numerous gaffes that caused people to accuse him of being out of touch with the average Australian. (See interactive below.)

In August 2014, Mr Hockey said a fuel excise increase would not hurt poor people as they “don’t have cars or actually drive very far”.

Finally, in June 2015, Mr Hockey said the tonic for high house prices, was for people to just earn more with “good jobs”.

“If you’ve got a good job and it pays good money and you have security in relation to that job, then you can go to the bank and you can borrow money and that’s readily affordable,” Mr Hockey said. Hockey urged not to double dip as ambassador