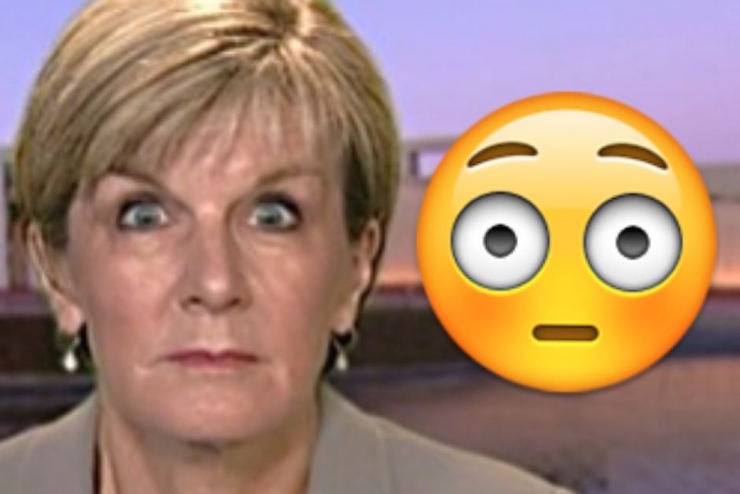 n the world of diplomacy, language is everything, but how do you interpret a “red-faced man” emoji — and is it “angry”?

The form of communication itself was foreign to the chair of the committee, Liberal senator Chris Back.

• Children’s TV icon Sesame Street moves to HBO
• Save money with these free, legal Netflix alternatives
• ‘I would never sleep with Jennifer Lawrence’

Attorney-General George Brandis helpfully explained they are “the smiley faces that you have on your text messages”, and added that the “21st century ministry” was not unfamiliar with it.

“Well I’m not aware of any such usage,” DFAT secretary Peter Varghese replied, adding that he, personally, was not a user of the characters.

Ms Bishop is a prolific user of emoji in social media and Senator Wong was seeking the department’s interpretation of the minister’s response to a Buzzfeed question about Mr Putin.

“I’d like to understand what the diplomatic message is of the red face – is it intended to suggest the Foreign Minister is angry at President Putin?” Senator Wong asked.

“It may be that the Foreign Minister is saying she’s angry with him, it may be that she thinks he’s a red-faced angry man, I don’t know.”

Senator Brandis offered: “It could be a reference to ideology.

“Context is everything, nobody suggests – and I don’t understand you to be suggesting – the communication concerned was a formal diplomatic demarche of any kind.”

Senator Brandis said it was “plainly not an expression of our relationship with Russia”.

The question was taken on notice, and the department will have several weeks to respond.

Ms Bishop said later she was surprised Labor senators didn’t understood the context and that Mr Putin himself would have welcomed her use of emoji.

“He self-describes as a hard man. In fact having met President Putin I think he’d be delighted with the application of the emoji that I used to describe him,” she told reporters.

“I note Senator Brandis suggested it was ideological. That could be the case, it might have been a multi-use emoji, I believe that’s possible.”

For the record, DFAT told the hearing it has used emoji in social media and gave the example of Guy Sebastian’s appearance at the Eurovision song contest.