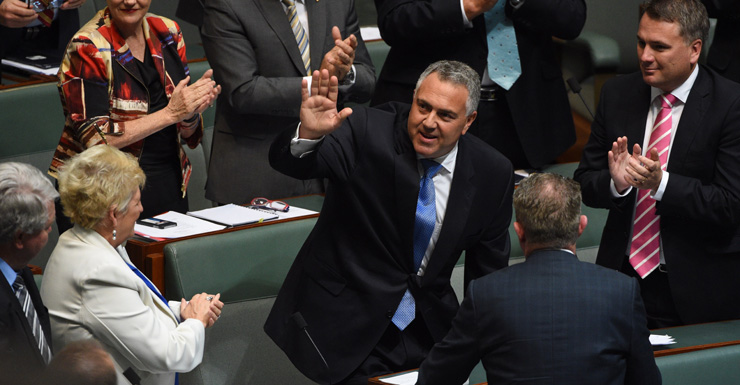 Former Treasurer Joe Hockey has delivered his valedictory speech to parliament on Wednesday, thanking his “beloved Liberal Party” for his almost 20 years in office.

But, during the lengthy address, after which he received a standing ovation, he admitted that: “The Abbott government was good at policy but struggled with politics.”

Mr Hockey also spoke of his affection for Tony Abbott, how social media is hurting politics, the need for co-payments in health and how Australia needs to reject “revolving door politics”.

Opening his retirement speech, Mr Hockey said: “I believe I have made a contribution to the future of this nation.”

In his first major public comment since the the leadership spill, Mr Hockey said revolving door politics must stop.

“We cannot make it normal to have four Prime Ministers and four Treasurers in just four years,” he said.

“Leadership instability and Ministerial turnover is the enemy of good public policy.”

He stressed that ex-Prime Minister Mr Abbott, who was overseas, is a “thoroughly decent man”.

“Tony Abbott … is one of the most selfless, hard-working and honourable people I have ever met. Yes, at times we have clashed, I confess, for more than 30 years we’ve argued our differences on everything,” Mr Hockey said.

Scroll down to watch the whole speech

On his role in the Abbott government, he reflected there were mistakes, but some victories.

“On the economy and job creation, national security, border protection, taxation, climate change, Immigration and Federal-State relations I believe we got the policies right,” he said.

“Nothing illustrated this better than the 2014 Budget, where the government had more courage than the parliament.”

He said that he had not been home for any of his six year-old’s birthdays, and would relish the chance to be more present with his family in the future.

On the future, Mr Hockey warned: “Our lifestyle today is being paid for by our children and the generations beyond.”

“Intergenerational theft and betrayal is not the Australian way,” he repeated, in echoes of his famous “age of entitlement” speech in April 2012.

He also spoke about impact of social media and the 24-hour news cycle in politics.

“Our jobs have become much more challenging over the years with the advent of a need-it-now culture,” he said.

“That’s been backed by the unending and often unreasonable demands of social media.”

He also said he was very proud that the Financial Services Inquiry, which he initiated, had been supported.

Mr Hockey entered parliament in March 1996, after winning the seat of North Sydney in that year’s election.

During his time in office, Mr Hockey served as the Minister for Human Services, Minister for Small Business and Tourism, Minister for Employment and Workplace Relations, and finally as the Federal Treasurer.

He admitted in the speech: “Yes, WorkChoices did go a little too far,” while he was the minister in the workplace portfolio.

He was slammed for his role in the disastrous 2014 Federal Budget, which set off more than a year of descent in public opinion of the Coalition government.

Its cuts to family tax benefits, proposed university reforms and and Medicare co-payment, outraged the public.

During the speech, Mr Hockey also spoke at length about the need for a more sustainable social services system, of which was one of the aims of the 2014 Budget.

His 2015 Budget was seen with more positivity, in particular through a $20,000 tax break to small business.

After the speech, Mr Turnbull admitted that: “Joe, we love you”.

“This is a big day in the life of a big man,” Mr Turnbull said.

“You are one of the giants of the parliament and all of us rose together and applauded you because we admire you.

“Your story is a classic Australian story of migration, of enterprise, of family, of small business and, above all, of love.”

“The standing ovation, spontaneous from your colleagues and the Opposition, should be one of the memories you cherish.

A by-election in his seat of North Sydney is expected before the end of this year.