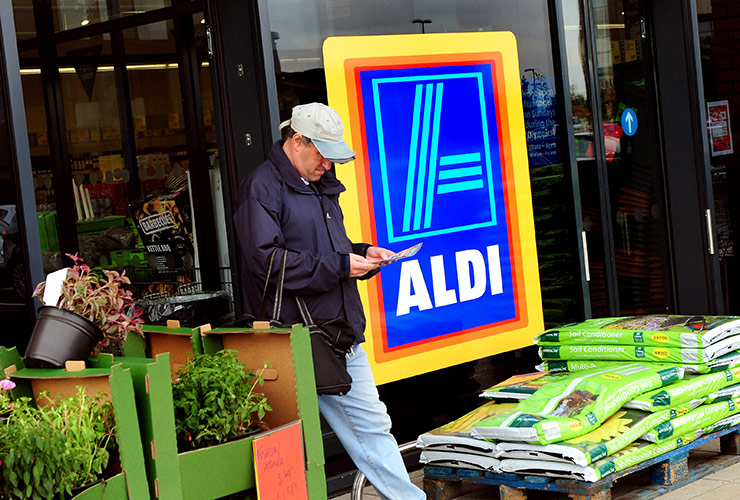 Aldi's success would have encouraged other outside players.

Discount supermarket Aldi plans to expand a rollout of new-look stores in a bid to capture middle-income earners who shop at the big chains.

A handful of stores across the nation have already been transformed into posh-looking shopping spaces, giving customers better access to fresh fruit and vegetables, meat and dairy, and offering better product display, lighting, large silver freezers and check-outs.

It was the first makeover to the retailer since it set up in Australia 14 years ago.

• Aldi attempts to lure staff with improved conditions
• Aldi, Woolworths in ACCC spotlight
• The hidden cost of cheap food: what the supermarkets don’t tell you

The New Daily reported last week that Aldi was able to keep its overheads low by employing a handful of staff, operating easy-to-stock stores and using shelf-ready packaging which can be wheeled into place rather than being unpacked by hand.

But executives at the German chain assured the changes would not result in price increases.

Aldi trialled the renovations in four stores during the past six months, with four more set to have the changes installed.

According to News Corp, the new-look stores were aimed at breaking out of the budget market and capturing middle-income earners, who usually shopped at the major supermarkets.

Aldi executives have dubbed the next phase of the trial “project fresh”.

“The market is modernising and saying we need to be more contemporary,” an Aldi spokesperson told Fairfax Media.

Executives said it would be quite some time before the new format was rolled out through the entire network of 372 Aldi stores, which produced annual revenues of $6 billion-plus.

Some industry experts are concerned that bargain shoppers could be scared off by Aldi’s shiny, fancy new stores.

Economist and blogger Jason Murphy told News Corp that Aldi must be careful when changing its decor and lay-out, because the way a store looked cosmetically could make a huge difference to how shoppers reacted to it.

“Cheap stores have to be very, very careful about their image too,” Mr Murphy said.

“You might have seen this trick in action at JB Hifi. They have loads of stores and it would be cost effective to print their signs. Instead they hand-write them – to make the whole place seem cheap and cheerful.

“So if Aldi makes its stores too glitzy, shoppers could get the wrong impression.”

He quoted Costco CEO Craig Jelinek, who said: “We try to create an image of a warehouse type of an environment … I once joked it costs a lot of money to make these places look cheap. But we spend a lot of time and energy in trying to create that image.”

Meanwhile, Aldi will be kept on its toes as another German discount chain, Lidl, is set to open its doors in Australia later this year, bringing more choice for consumers.

Lidl is seen as the chief competitor to Aldi across Europe and the UK, and was ranked by Deloitte as the fourth-largest retailer in the world with $128 billion in annual sales.

Confirming its arrival, The Australian reported that Lidl had recently contacted logistics providers to help create a network of distribution centres and transport links to shift food, groceries and merchandise around Australia.

Monash Business School professor Graeme Samuel told News Corp that one reason why shoppers preferred Aldi was because it offered lower-cost generic and homebrand products made from quality ingredients.

“Its products have forced Coles and Woolworths to focus on their own homebrand products, improving quality and driving down prices,” Professor Samuel said.

“An inquiry into the grocery sector in 2008 found that wherever there was an Aldi present, prices at Coles and Woolworths tended to be cheaper.”

Professor Samuel said Aldi competition was good for consumers, and governments should not inhibit it.

He said by removing restrictive covenants that the big supermarkets had imposed on leases, which limited other supermarket chains from opening in shopping centres, also contributed to competition.

“This is what competition is about, when they consider (restrictive) trading hours or laws, they need to remember the consumer suffers as a result,” he told News Corp.

The new-look Aldi store trials have already been rolled out in Kallangur, Queensland, Chisholm in Canberra, NSW’s McGraths Hill and Highton in Victoria.

This comes as the supermarket chain prepares to establish itself in South Australia and Western Australia, opening 70 new stores in 2016 with more than 400 job opportunities.

– with reporting by Emma Manser