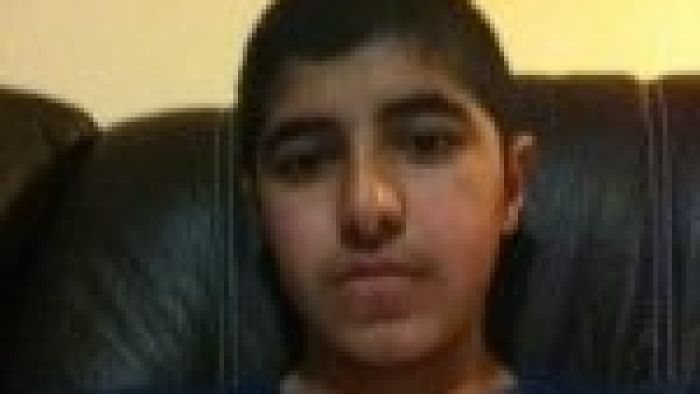 Three years ago Hamza was a 16-year-old with a world of problems.

One of his brothers was in jail for murder, another brother was running with a violent Sydney crime gang, and Hamza was dreaming of his own impending death.

“I got scared and I asked God to give me a second chance,” said Hamza, who spoke with the ABC’s 7.30 program on condition that he only be identified by a pseudonym because he said he feared for the safety of family members, some of whom do not share his belief in violent jihad.

Hamza grew up in a family which embraced a moderate version of Islam.

Then, in year 10, he was introduced to an ultra-orthodox movement within Sunni Islam known as Salafism.

The man who took Hamza under his wing was Omarjan Azari, an Afghan-Australian who last year was charged with conspiracy to murder over an alleged plot to abduct and kill a random Sydneysider.

Since his adoption of hardline Islam, Hamza has been a member of a small group of young Islamic State supporters in western Sydney whom police and security agencies believe are committed to violent jihad in Australia.

Hamza says while he supports radical Islam, he does not want to cause harm in Australia.

“It’s all lies. They have no evidence. If they had evidence they would have [used it],” he said.

Inside story of young men involved in terrorism raids

This is the first time the Australian public has heard the inside story of one of the young men involved in recent terrorism raids in Sydney.

His story sheds a light on the world of teen radicalisation – a poorly understood issue which has gripped Western governments due to the increasing youth of terrorist plotters.

“Everyone wants to die for Allah, we all want to live the best life in the hereafter and want to make it to the top of the seven levels of jannah,” he said, using the Arabic word for the Islamic concept of paradise.

Hamza was one of more than a dozen men raided in September last year over the alleged abduction and killing plot for which Azari has been charged.

He is also close friends with Raban Alou.

Alou allegedly gave a gun to 15-year-old schoolboy Farhad Jabar and counselled him to undertake the attack in a meeting that day at the Parramatta mosque.

Hamza also knew Jabar and the pair studied the Koran together at the mosque.

“He was just a quiet dude, stuck to himself, always in worship, that’s it … always in his own corner, reading the Koran, doing worship,” Hamza said.

While he says he is not committed to violent jihad in Australia, Hamza’s view of Islamic State – the most brutal and powerful of the dozen or so Sunni militant groups fighting against the regime of Syrian president Bashar al-Asaad – is less clear.

When asked if he supports them, he replied: “I’m not going to answer that, because if I say yes, I’ll get in trouble, and if I say no, I’ll be a liar. I accept some of their opinions and I disagree with other opinions.”

“He’s very evasive in his answers … His simple answer was, if I say I [support Islamic State], authorities will come to me, but if I say I don’t, I’m a liar,” Mr Moroney said.

“So in simple terms he does support them, and that’s alarming.”

Australian society a ‘den of immorality’

Hamza supports beheadings in Syria and Iraq and believes strict sharia law should be implemented across the world.

In comparison, Australian society was a den of immorality, he said.

“Look at it, there’s brothels, every corner you go there’s a brothel. There’s strip clubs, there’s people drinking, people committing fornication in front of other people, like, they have no shame.”

The group of young men he is part of is made up of teenagers and men in their early 20s.

Most became friends through a small group of public high schools in Sydney’s west.

Most study the Koran under a small group of hardline salafi sheikhs and pray at the Parramatta mosque.

The group has been labelled the shura – an Arabic word for council – by police.

“We advise each other,” Hamza said.

“One person has a decision and we ask each other if it’s right or not, shall we go, shall we do it, shall we go to this place, help out. It’s like that.”

The group’s religious observance is also central to their bond.

“What’s haram [forbidden] in our religion is to listen to music, to talk to women, to intermingle with other people, to do a lot of other bad stuff like listen to music and go night clubbing, all this. This is not part of us, the non-believers do it.”

The bond between the young men in the group remains strong.

“[It’s] like gangsters – they have a brotherhood, we have our brotherhood. Because a brother said a believer is one body, so I feel his pain.

“If he gets hurt, I feel his pain. If I get hurt, he feels my pain. That’s how we are. We stick together.”

‘Everyone wants to die for Allah’