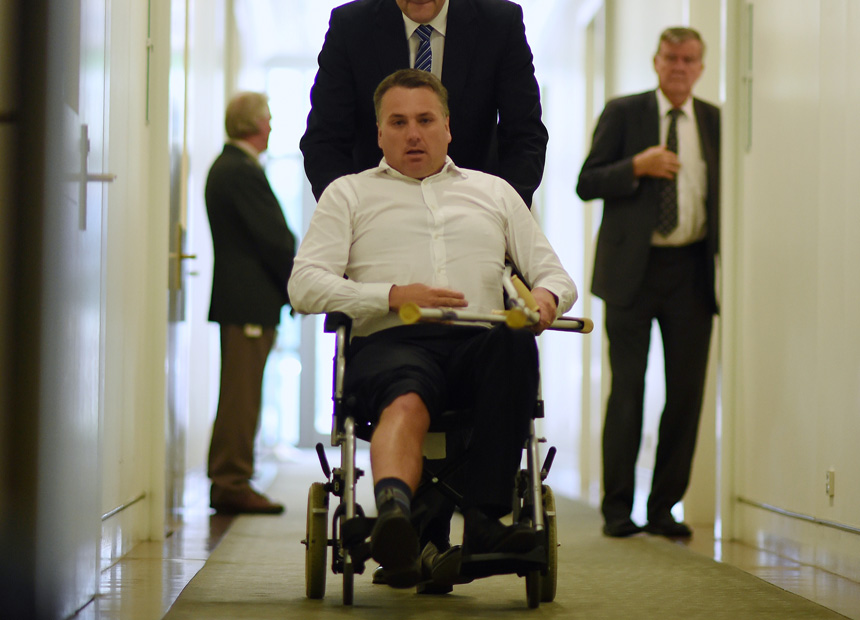 The bill for a big party on the night Tony Abbott was ousted as prime minister just went up after the former PM announced he would pay for a valuable Italian marble table that was “smashed” during the event.

Mr Abbott held the bash for staff and supporters after Malcolm Turnbull took over as Liberal leader.

In a statement, Mr Abbott said as host that he took full responsibility.

“During this event, a coffee table was damaged,” Mr Abbott said late on Monday night.

“I have asked my office to have the Department of Parliamentary Services (DPS) invoice me for the value of the table.

“It was my event so I take responsibility for it.”

Cleaners reportedly found pieces of the table in ministerial offices the day after the party in parliament’s cabinet anteroom on the night of September 14.

Earlier, speculation about how the table was damaged became a matter of national debate after pictures of it were revealed in a Senate estimates committee meeting.

Several tales have emerged about exactly what happened to the table.

Emails presented to the hearing seemed to add weight to speculation rough treatment at a riotous parliamentary party was the cause, indicating a “person standing or dancing” upon the table may have caused the damage.

A skilled stonemason told The New Daily that standing on a marble table that was not reinforced through the middle could “definitely” break it.

“It depends on what type of stone it was because stone is like a sponge, some are more porous than others and can break easier,” RF Gaites leading stonemason Issac Furgiuele said.

“The thing that makes stone weak is the veins, they are usually the weak spot – like a knot in timber.”

The colour of the stone would also come into it – darker colours are stronger than lighter shades.

The table, made of Italian marble with a bronze base, cost the Commonwealth $590 when it was purchased in the 1980s.

Speculation an incident at Mr Abbott’s farewell was to blame took off when the now Minister for Cities, Jamie Briggs, appeared in public in a wheelchair a day later.

He denied shimmying his way to injury at a wild post coup party, according to ABC, but had “done an ACL, running”.

One was under $1000, while another undisclosed quote was “well over that price”.

But the price of repairs wasn’t the biggest sticking point for the Senators overseeing the hearing – semantics also dominated the day.

Liberal Senators Cory Bernardi and Dean Smith squabbled with Ms Wong over whether the table was “broken” or “smashed”.

“I’d say if the marble was in bits, I’d say it was smashed,” Ms Wong suggested. Mr Bernardi described the word “smashed” as “inflammatory language”.

The committee also addressed the topic of a missing set of crockery, believed to have been unaccounted for in Bronwyn Bishop’s office stocktake in August.

It was described as including “60 pieces of the Queen’s dining set”.

However, it was later confirmed the crockery was merely returned to storage.

Video of the Senate exchange can be seen below.