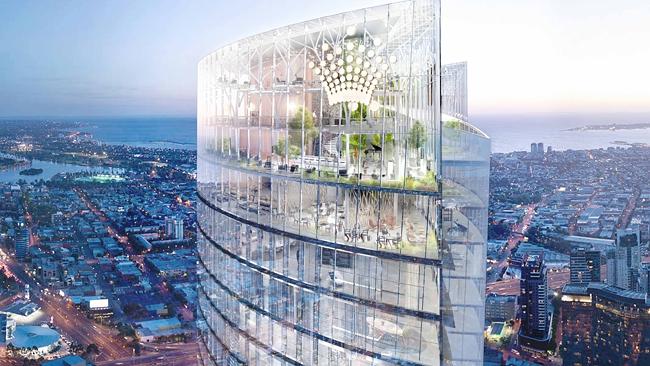 If approved, the “Tower of Light” will stand at an intimidating 90-storeys, complete with 388 six-star hotel rooms and 680 luxury units.

That will put it at an equal height with Eureka Tower in Melbourne, and just seven metres behind the Gold Coast’s Q1 tower.

The tower will connect to Crown Casino via a glass and metal walkway across Queens Bridge Street.

The proposal comes from global competition winners, British architects Wilkinson Eyre, and will be the fourth Crown-owned hotel in Melbourne.

There will be no gaming facilities in the complex, according to the Herald Sun.

For the proposal to be approved, it will need to pass new height regulations brought in by the Andrews government and be deemed of “state significance”.

While Crown did not wish to discuss the potential cost of the development, the Herald Sun reported it was close to $1.5 billion.

“There have been periodic attempts to get this kind of huge tower approved in Melbourne – they’ve all failed,” he said.

“The recent height controls in Melbourne are designed to prevent this kind of huge construction and they should be adhered to.”

Speaking to the Herald Sun, Crown owner James Packer talked up the need for such a tower.

“Melbourne is the world’s most liveable city and we want to keep the tourists rolling in, but to do that you have to keep investing and upgrading,” he said.

“It’s not feasible in this age of competitive global luxury travel to ask six-star hotel guests to dodge the traffic and wet weather just to visit another facility in the resort. This discreet yet attractive link is a necessity for a six-star hotel to succeed,” he said.

The tower will also feature a shopping precinct on the bottom floor, as well as an all-day dining area on level 38, a garden terrace level open to the public and a 300-metre high bar on the top floor.

If approved, the Queenbridge Hotel Tower would open in either late 2019 or early 2020, creating 1600 initial construction jobs.