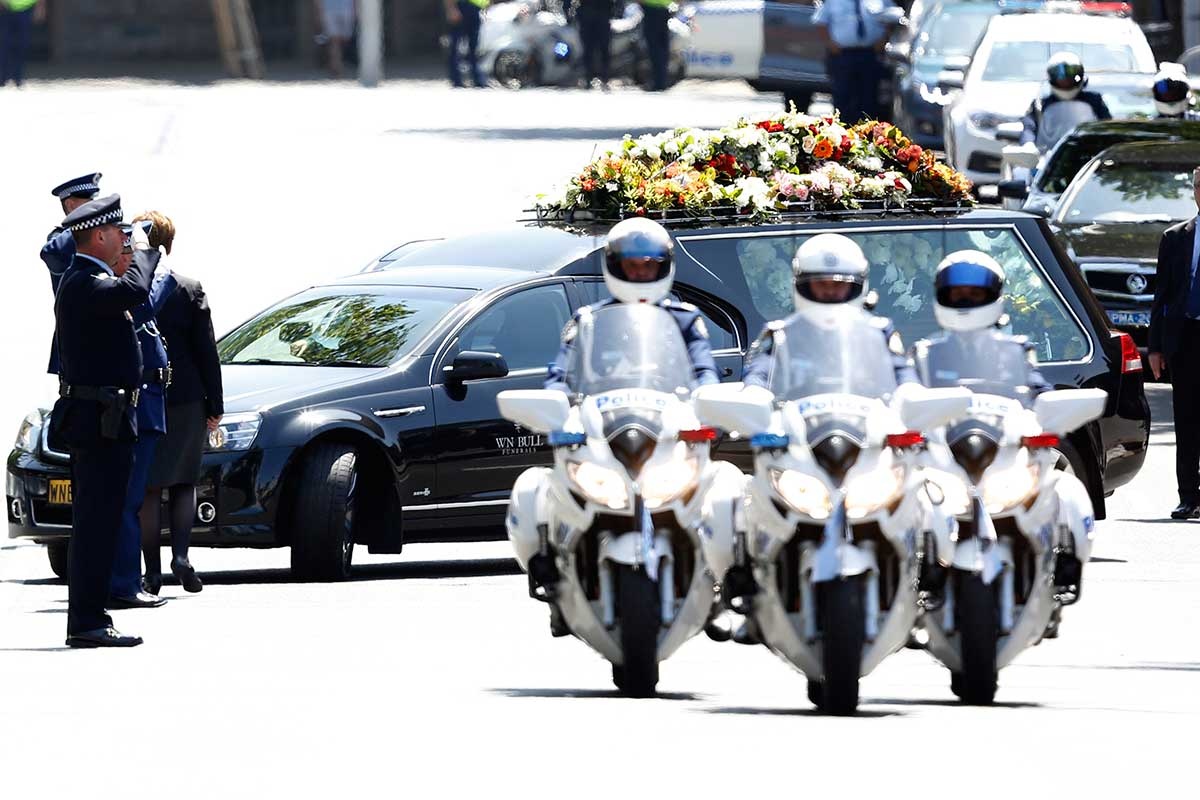 It was the little things that meant most to Curtis Cheng – switching the TV off at dinner, cherishing his wife’s first gift and being positive at work.

The husband, father and NSW police employee has been remembered as a gentle man who had a quiet passion for serving others, before he was killed by a 15-year-old terrorist outside Parramatta police headquarters.

More than 1500 people farewelled the 58-year-old at a funeral service at St Mary’s Cathedral in Sydney on Saturday morning, more than two weeks after the shooting.

Mr Cheng’s son Alpha described how his father had worked two jobs in Hong Kong while studying accountancy to give his family, including wife Selina and daughter Zilvia, a chance at life in Australia.

“Dad was a tremendously dedicated and patient person,” he told mourners during the eulogy.

He said although his father was a calm man, he knew how to have fun.

“Back in the 70s, he won a disco-dance marathon by dancing nonstop for over 24 hours,” Alpha Cheng said after describing his father’s dancing antics at a police gala.

The best way to pay tribute to his dad’s life was to follow his example, Alpha said.

“We need to do the little things for the people around us … if we all do that little bit more as dad did in his life, I believe we can live in a more gentle and harmonious world.

NSW Police Commissioner Andrew Scipione told mourners he couldn’t describe the devastation across the force, where Mr Cheng had worked as an accountant for 17 years.

“The gentlest of friends lost to an act of terror; a man, the manner of whose death stands in stark contrast to the gentle, honourable way he lived his life,” Mr Scipione said.

Mr Scipione said Mr Cheng was cherished by his colleagues who said he was “nothing but positive”.

“The pain and disorientation we feel at Curtis’ death is all the more acute as a result.”

Officers stood guard as their colleague’s coffin left the cathedral with a sombre drumbeat sounding during the procession and salute of an executive guard of honour.

Religious figures, including Archbishop Anthony Fisher, embraced Selina Cheng, who was supported by relatives and friends.

Mr Cheng, 58, died after 15-year-old Farhad Jabar shot him as he was leaving work on Friday October 2.

Jabar died after he was shot by police at the scene.

Two men who allegedly helped the 15-year-old Jabar carry out the attack were refused bail in court on Friday.