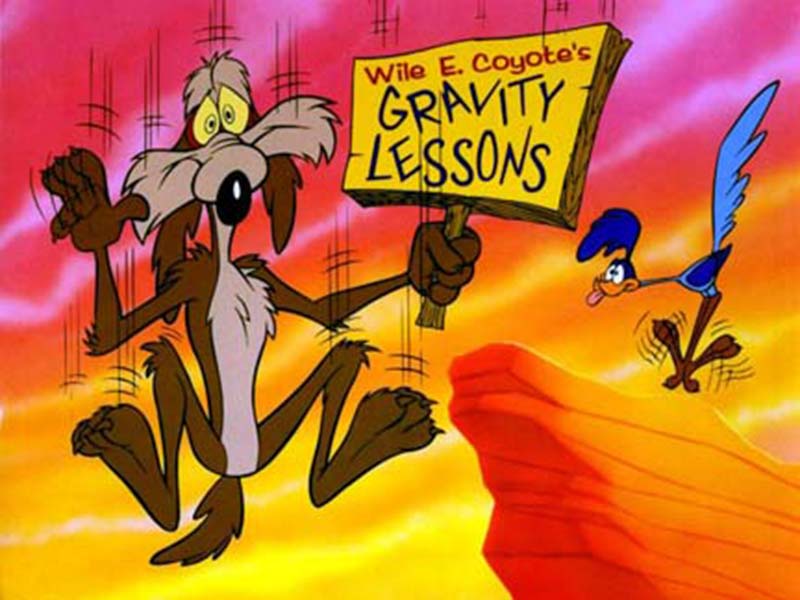 Given much of Australia’s national politics takes place in a castle-like edifice perched at the top of a hill, it often bears more resemblance to a Disney movie than voters’ everyday lives.

However this past week, politics escalated from fantasy to farce as the Labor opposition tried to find ways to trip up the tyro Prime Minister Malcolm Turnbull and his shiny new ministry.

Unfortunately for Labor leader Bill Shorten, he ended up looking more like Wile E Coyote than a viable alternative PM.

Rather than argue the case on the many policy fronts available to it, Labor set up a series of ramshackle booby-traps in the hope of snaring an under-prepared or inexperienced minister.

First there were questions to the new Treasurer, Scott Morrison, that tried to stump him on the numbers.

“How much has revenue fallen between the Coalition’s 2014 and ’15 budgets? How much have Australian living standards fallen since the last election? Is government spending this financial year expected to be higher or lower than the level of spending forecast for the same year at the time of the last election?”

However, asking Mr Morrison to pluck numbers from the air is as much an accurate gauge of his competency as asking that other trick question: “What’s the price of a loaf of bread?”

For his part, the Treasurer blustered and bumbled his answers, much to Labor’s delight.

Then there was the unedifying treatment of newly-appointed Assistant Treasurer, Kelly O’Dwyer.

Each time Minister O’Dwyer stood at the despatch box to answer a question she was met with a wall of noise from Labor, noticeably louder than that usually levelled at male ministers as a way of putting them off their answer.

It’s hard not to conclude the opposition sees the new young female minister as an easy target, and it’s not a good look for them.

Labor plays the politics of envy

Nevertheless, Labor clearly hoped the nation’s millionaire PM would be the most prospective sitting duck this week, as it tried for the third time in recent political history to use the politics of envy to its advantage.

Senator Dastyari led a smear campaign against the PM, ostensibly about Mr Turnbull’s investments having a connection to the Cayman Islands tax haven, but actually hoping to foment voter resentment over the PM’s wealth.

The PM finally belled this cat after Labor insisted on devoting much of the week’s question time to the matter, suggesting if Mr Shorten wished to wear a sandwich board telling voters that “Mr Turnbull has a lot of money”, he should feel free to do so, although “I think people know that”.

Anything they can do, we can do better

Not to be outdone by the opposition, there were times when the government also descended into farce this week.

In particular, the privacy-invading mandatory data retention rules came into effect, requiring phone and internet providers to keep two years’ worth of information on their customers’ use of the services.

The community had been assured by the government that this information will be handled responsibly, yet it soon became clear the affected companies have not yet even been provided with clear instructions on what data to collect. This was hardly a confidence-inspiring start to the scheme.

In the eye of the beholder

Meantime Liberal MP Craig Kelly was focused on our sensibilities, complaining about the appropriateness of artworks on display in the public areas of Parliament House.

Clearly unaware of the huge naked female bronze sculpture prominently displayed at Canberra airport, which greets all comers to the national capital, Mr Kelly took offence on our behalf at a parliamentary painting that merely depicts a person’s buttocks.

In an effort not to be left out of this jolliness, Greens MP Adam Bandt posted a tweet of himself beside the painting with a sign saying “this is art”.

This was a considerably courageous move in social media terms, and in no short time Mr Bandt’s sign had been photoshopped and reposted to convey several other amusing statements.

All hilarity aside, there were also serious matters afoot this week, with influential calls for the government to change the way it handles women and children held in mandatory detention.

Following last week’s protest by doctors and other medical staff at the Royal Children’s Hospital, government backbencher Russell Broadbent labelled indefinite detention “unacceptable” and called for the government to change its mandatory detention policy in response to public opinion.

“Women and children in detention, behind razor wire in this country or locked away on an island, is unacceptable,” Mr Broadbent said.

“The Australian people, through the Royal Children’s Hospital, have shifted. They’ve said our detention policies are not good enough.”

Mr Broadbent is a friend and supporter of Mr Turnbull, so it’s not insignificant he took to the media this week to make his case.

“When the people shift, the politicians will shift,” he said. It’s unknown whether this was more a statement of hope or expectation.