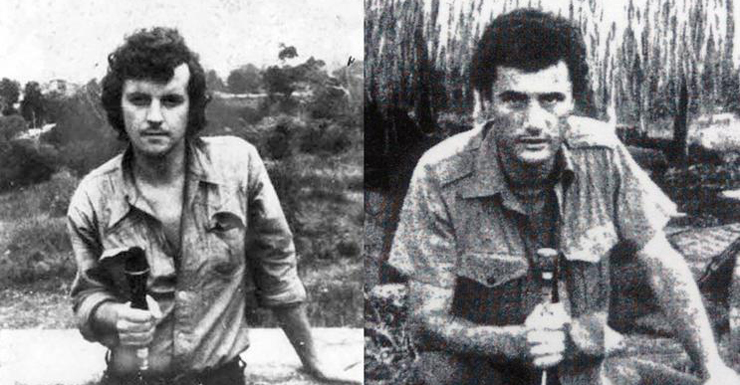 Six Australian journalists killed while reporting on the Indonesian invasion of East Timor have been honoured in Canberra.

The dawn service at the War Correspondents Memorial on Friday marked 40 years since their deaths.

The Balibo Five — reporter Greg Shackleton, camera operator Gary Cunningham and sound recordist Tony Stewart of the Seven Network, along with reporter Malcolm Rennie and camera operator Brian Peters from the Nine Network — were killed as they witnesses an Indonesian incursion in the town of Balibo on October 16, 1975.

A sixth, Roger East, a reporter working for Australian Associated Press and Reuters, was executed in Dili on December 8, 1975.

No one has been brought to justice for their deaths.

The Media Arts and Entertainment Alliance used the 40th anniversary of the killings to launch the Balibo Five-Roger East Scholarship, which MEAA chief executive Paul Murphy says will fund travel, study and living expenses in Australia for East Timorese journalists.

He said the scholarships would include short courses at major journalism schools, and work placements in newsrooms in Australia.

“We believe a practical program like this is the most appropriate way for our union to honour and commemorate the Balibo Five and Roger East,” Mr Murphy said.

“A little over a decade since East Timor became an independent sovereign state, press freedom is still fragile and there are few formal structures to develop journalism skills.”

On the eve of the anniversary, Indonesia declared the matter long finished.

“Indonesia too has considered that this problem has been long finished because it’s not something that can be considered as a violation of the law,” Indonesian foreign ministry spokesman Arrmanatha Nasir said on Thursday.

“It was accidental and it’s already finished.

“The relationship between Indonesia and Australia is much bigger than one issue, than one problem.”

Another ceremony will be held at the St Kilda Botanical Gardens in Melbourne at 3pm.

A TIMELINE OF THE KILLINGS

October-November 1975 – Richard Johnson, third secretary of the Australian embassy in Jakarta, attempts to investigate the deaths and is “thwarted at every turn” by Indonesian authorities.

April 1976 – Australian embassy official Allan Taylor concludes, after conducting inquiries, that there is “no incontrovertible evidence” about how exactly the five journalists died.

October 1995 – After two inconclusive inquiries in 1975 and 1976, new eyewitness accounts from Timorese soldiers and a former Indonesia-appointed governor of East Timor spark calls for a new investigation.

May 1996 – Sherman inquiry concludes the Balibo Five died at the hands of Indonesian-led troops in the heat of battle.

August 1998 – Australia’s foreign ministry denies allegations of a “cover-up” and that it was forewarned about the impending Indonesian attack.

December 2000 – NSW police launch an investigation into the deaths, opening the way for a coronial inquiry.

2000-2001 – Investigation of civilian police from the United Nations Transitional Administration in East Timor (UNTAET) recommends a number of arrest warrants be issued. Attempts blocked by Indonesian government, which refuses to allow nine key suspects to be interviewed.

June 2002 – A private report by Inspector-General of Intelligence and Security Bill Blick finds the Australian government did not mishandle intelligence reports on the deaths.

June 2005 – NSW Coroner’s Court announces it will hold an inquest into the death of Brian Peters, who was a NSW resident.

December 2005 – Declassified diplomatic cables suggest the British and Australian governments colluded to cover up the killings.

January 2006 – Commission for Reception, Truth and Reconciliation in East Timor, a statutory authority formed to investigate human rights abuses between 1974 and 1999, finds the men were not killed in crossfire and that Indonesian forces had prior knowledge of their presence in Balibo.

March 1, 2007 – A warrant is issued for former military captain Yunus Yosfiah, following his failure to attend the inquest. Yosfiah again declines to participate, saying the matter is “closed”.

May 8, 2007 – Former prime minister Gough Whitlam tells the inquest he twice warned Greg Shackleton not to go to East Timor, and says he knew nothing of the deaths until five days after they occurred.

November 2007 – Daughter of Don Willesee, foreign minister in 1975, claims he made a death-bed confession in 2003 that the government knew the newsmen had been murdered.

November 2007 – Deputy State Coroner Dorelle Pinch finds Peters and the other four were captured and killed by Indonesian forces to stop them reporting the invasion of East Timor. Attorney-General Philip Ruddock is asked to consider war crimes charges and urgent action on repatriation of the men’s remains.

December 2008 – Gatot Purwanto, a former Kopassus special forces officer, tells media the men were executed and their bodies burned to conceal the evidence.

July 2009 – The release of the film Balibo spurs interest in the case. The film is banned in Indonesia.

September 2009 – The Australian Federal Police announce an official war crimes investigation but forewarn it will be complex.

March 2010 – Indonesian President Susilo Bambang Yudhoyono expresses sympathy to the families during a visit to Canberra.

October 2014 – The AFP probe is dropped, citing insufficient evidence to prove an offence.

October 16, 2015 – After 40 years, the families of the five men still have not seen their killers brought to justice.