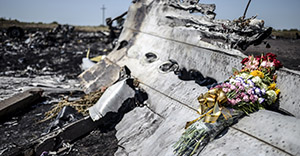 This photo taken on July 26, 2014 shows flowers, left by parents of an Australian victim of the crash, laid on a piece of the Malaysia Airlines plane MH17, near the village of Hrabove (Grabove), in the Donetsk region. Ukraine sought on July 25 to avoid a political crisis after the shock resignation of its prime minister, as fighting between the army and rebels close to the Malaysian airliner crash site claimed over a dozen more lives. Dutch and Australian forces were being readied on July 26 for possible deployment to secure the rebel-held crash site of the Malaysia Airlines flight MH17 in east Ukraine where many victims' remains still lie nine days after the disaster claimed 298 lives. AFP PHOTO/ BULENT KILIC

MH17’s tragic end: this is how it happened

Official report into the shooting down of the flight, released just ours ago, confirms the worst fears about the victims’ horrifying final moments. Read more.

The most important question that remains unanswered

The Dutch-led investigation is perhaps most notable for what it didn’t reveal. Here’s what families and world leaders still want to know. Read more.

Taking the power back: one tiny town’s fight for a greener future

It has never been done in Australia, but one town is paving the way to be the first to switch to 100 per cent renewable energy. Read more.

See if your favourite movie passes the Bechdel test

This simple test only has three criteria, but most popular movies fail it. How does your favourite flick fare? Read more.

How we are flushing wads of cash down the Murray River

It’s a mighty river system and it could unlock great prosperity, but for one frustrating thing – the politics of water. Read more.

Men have better toilet hygiene than women. The world is broken

Shock, horror. It simply cannot be. This survey claims blokes are just as hygienic, possibly more so, than females in the work bathroom. Read more.

The government just learned a whole lot more about you

Everything you do online or on the phone will now be kept on record for two years, but there are ways to get around a nosy government. Read more.

Car of the week: spirited sedan takes it to the limit with ease

This car is going to be popular. Place your order for the fastest and most engaging Octavia yet, before it’s too late. Read more.