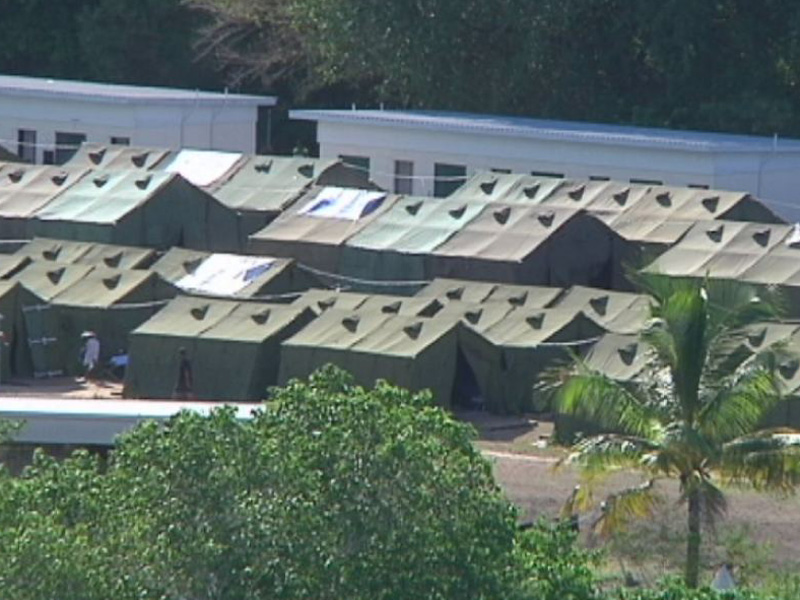 New Zealand is weighing how it could take the refugees from Nauru. Photo: ABC

Nauruan police say there is not enough evidence to prove that a 26-year-old Somali woman was raped on the island.

The woman’s case was raised last month on the ABC’s 7.30 program, with the show obtaining a video recording of the harrowing emergency call she made after the alleged incident on August 21.

Known as “Najma”, the woman reported to police that two Nauruan men had dragged her into the bushes and raped her.

She said it took the Nauruan police four hours to arrive.

Now the government of Nauru has issued a press release stating that a full investigation has been conducted into the alleged rape.

It said the inquiries by police at the scene found no evidence of the victim’s clothes being ripped or shredded, and no visible cuts or abrasions.

Police also said they were unable to locate the “cave” into which the woman said she was dragged during the attack, and that a medical examination was conducted after the incident, but evidence of the rape could not be found.

“There was no lacerations or bruising around the vaginal region and a spermatozoa test on the victim after a vaginal swab proved negative”, the statement said.

But in an extraordinary breach of privacy, the real name of the alleged rape victim has been released by the Nauruan government’s Australian PR agent.

Mercer PR distributed the government press release on Monday morning, and attached to the email was a police file of the incident which includes the woman’s name.

When contacted by the ABC, a spokesman for Mercer PR said the government of Nauru, and the country’s police force had authorised the release of the alleged victim’s identity.

However, when reporting on the case last month, 7.30 did not reveal the woman’s name as she feared reprisals for speaking out.

In a separate development, the ABC has confirmed that a second woman who featured in the same 7.30 investigation has now been brought to Australia for an abortion.

Known as Abyan, the 23-year-old woman is reportedly 11 weeks pregnant, after being raped in the Nauruan community.

The woman’s lawyer George Newhouse has expressed his relief that the woman has been brought to Australia for treatment.

“Our client is relieved that there has been a resolution to this sensitive matter. She is now in Australia and the Commonwealth Government has agreed to provide her with medical treatment,” he said.

“Our client has asked us to thank concerned Australians for their support and the PM and the Minister for Immigration for their understanding.

“We will continue to monitor the situation and to ensure our client receives the treatment and care she requires.”

Ability of Nauru police to investigate called into question

Since the report was broadcast, Somali refugee women in the Nauruan community have reported threats of violence directed at them by local Nauruan men.

The ability of the Nauruan police force to investigate serious crimes has been called into question repeatedly in recent months.

“Nauruan police have not shown any independence. They are politicised and that’s a regrettable fact,” he said.

“The Nauruan police force needs a lot of support and training from professional expertise outside the country.”

A recent Senate inquiry found heard that detention centre operators had referred 50 cases to Nauruan Police in recent years, but just five convictions had been obtained.

Prime Minister Malcolm Turnbull described the allegation of rape made in the 7.30 story as “alarming”, and the Australian Government has promised more support for Nauruan authorities.

Nauruan police say they have now recommended that “Najma’s” case be closed due to “insufficient evidence”.