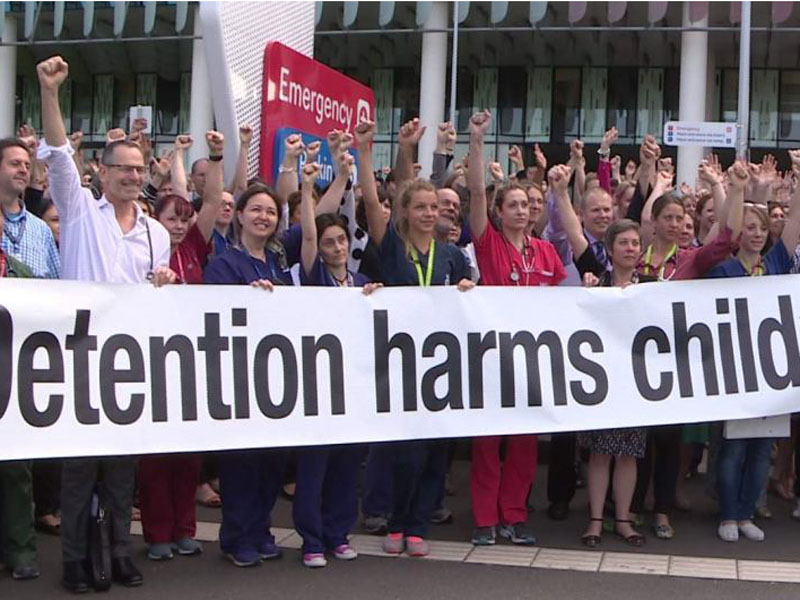 The group of doctors said it was unethical to return the kids to unsafe conditions in the detention centres, that could compromise their health.

Resisting new Federal laws that state health workers who speak out against immigration detention centre conditions face two years jail, more than 400 of the RCH’s doctors joined together on Friday demanding children be released from detention.

In a pre-recorded statement provided to media, doctors said they were treating children who had spent more than half their life in immigration detention centres.

“It’s become so common that it’s almost normal in children from detention to have these symptoms.

“At the Children’s Hospital, our team find it’s almost impossible to treat these children effectively while they remain detained.”

But Mr Dutton stood firm on the matter, telling News Corp he would not support a change in government policy despite the doctors’ move.

“I understand the concern of doctors, but the Defence and Border Force staff on our vessels who were pulling dead kids out of the water don’t want the boats to restart,” he said.

Fairfax Media reported that RCH doctors recently refused to send an asylum seeker, 30, and her child because the Immigration Department would have placed the pair back into detention.

They were flown from detention in Nauru to Australia at the end of 2014 for hospital treatment.

“It was a situation of having to negotiate her and her family’s treatment needs, and it was very much agreed that it was against their interests to be returned to detention,” Professor Newman, who is also vice president of the group Doctors for Refugees, told Fairfax Media.

“How can we recommend that people go back into detention when we know they’re not going to get proper health care?”

She said the pair were eventually released into the Melbourne community with “considerably improved’ health.

According to Australian Border Force statistics there are 93 children being held on Nauru and 104 children in detention in Australia.

There are 405 children living in Australia in community detention.

AMA president Brian Owler said in a statement that all children being held in immigration detention centres should be immediately released to a safe environment.

“Some of the children being treated by the Melbourne doctors have spent half their lives in detention, which is inhumane and totally unacceptable,” Professor Owler said.

“These children are suffering extreme physical and mental health issues, including severe anxiety and depression. Many of these conditions will stay with them throughout their lives.

“The high quality care and recovery they are receiving at the Royal Children’s Hospital and other hospitals around Australia will be diminished once the children are returned to the detention centres.

“The detention centres are not suitable environments for the health of all detainees, but the effects on children are far worse.

“These poor people, whatever their circumstances, are in our care. We must stop this vicious cycle of harm.”

RCH paediatrician Paul Monagle said the doctors had no hope of improving the situation if children they treat were sent back to detention.

“What we see from children in detention is a whole range of physical, mental, emotional and social disturbances that are really severe and we have no hope of improving things if we are sending those children back to detention,” Professor Monagle said.

“I’m extremely proud to be the health minister in a state where its doctors and nurses are putting the interest of children first,” Ms Hennessy told Fairfax on Sunday.

“If the staff of the Royal Children’s Hospital come to the clinical view that it is not in the interests of those children to go back into detention, then we will support them.”