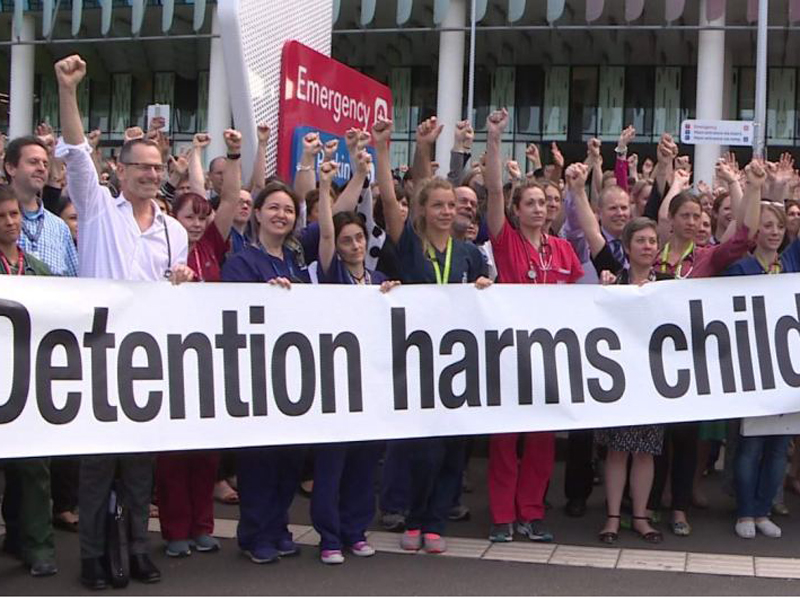 Doctors are calling on the prime minister to heed concerns at Melbourne’s Royal Children’s Hospital about discharging asylum seeker children back into detention.

The Australian Medical Association is backing staff at the hospital who say it would be unethical to send children back to unsafe conditions.

The AMA says it will contact Malcolm Turnbull and Immigration Minister Peter Dutton urging them to intervene with a compassionate and humane solution.

Doctors from RCH have called on the Federal Government to end the practice of keeping children in detention, saying they cannot effectively treat them.

Almost 1,000 doctors, nurses and clinical support staff across the RCH have joined the call.

In a pre-recorded statement provided to the ABC, doctors said they were treating children who had spent more than half their life in immigration detention centres.

“It’s become so common that it’s almost normal in children from detention to have these symptoms.

I understand the concern of doctors, but the Defence and Border Force staff on our vessels who were pulling dead kids out of the water don’t want the boats to re-start.

“At the Children’s Hospital, our team find it’s almost impossible to treat these children effectively while they remain detained.”

According to the Australian Border Force’s most recent report, published on August 31, there are currently 93 children being held on Nauru and 104 children in detention in Australia.

There are 405 children living in Australia in community detention.

RCH paediatrician Professor Paul Monagle said the doctors had no hope of improving the situation if children they treat were sent back to detention.

“What we see from children in detention is a whole range of physical, mental, emotional and social disturbances that are really severe and we have no hope of improving things if we are sending those children back to detention,” he said.

The call comes after an open letter signed by more than 1,200 people, including Australian of the Year Rosie Batty, urged Prime Minister Malcolm Turnbull to shut down the Manus Island and Nauru immigration detention centres.

They argued that conditions at the offshore centres perpetuate violence against women, children, families and gay men.

Ms Batty wrote in the letter: “Those who care about violence against women and children need to care about what happens to people elsewhere under our care.”

Immigration Minister Peter Dutton said the Coalition was elected to “stop the boats” and there would be no change in policy.

“I understand the concern of doctors, but the Defence and Border Force staff on our vessels who were pulling dead kids out of the water don’t want the boats to re-start,” he said in a statement.

“My support is with the Defence and Border Force staff and I won’t be supporting a change in the policy.”

He said the Federal Government had significantly reduced the number of children in detention.

“The emotional development of children is affected, their speech and learning can be affected and the anxiety and mental health consequences can start from very early childhood and we see that has an impact on their development long term,” she said.

“Children need a lot of security and opportunity to play in order to develop normally.

“The environment of a detention centre is so far from what develops normal opportunity, the families don’t have the opportunity to play together, the children are subject to rules and regulations that no typical child is subjected to.”

Victorian Health Minister Jill Hennessy tweeted in support of the RCH staff, saying they were “acting in the best interests of their patients”.

Dr Connell called on the Federal Government to end the practice.

“What we need now is for moral leadership on this issue to recognise that this is a significant problem and to move towards steps to remove children from detention,” he said.

PM ‘must act’ on asylum kids