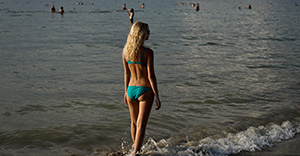 To go with AFP Story Thailand-lifestyle-tourism-crime,FEATURE by Daniel Rook This picture taken on February 14, 2013 shows a tourist on Patong beach in Phuket, southern Thailand. From jet ski scams to robbery, assault and even police extortion, for the millions of tourists who flock to Thailand each year the kingdom does not always live up to its reputation as the "Land of Smiles". Now following a flurry of complaints, governments are urging the country to do more to protect the safety of the record numbers of foreign visitors. AFP PHOTO / Nicolas ASFOURI (Photo credit should read NICOLAS ASFOURI/AFP/Getty Images)

‘People are saying all sorts of things about me’

Blokey sport rocked by “unacceptable” and “uncalled for” sexist comments against all-female team. Sadly, it comes as no surprise Read more

Ok, it’s time I admitted. I was completely wrong about Uber

Arguments against the controversial ride sharing app are melting away. Here’s how the service won me over Read more

Plus, why Jay Z and Beyonce’s new house might look familiar to you and Cate Blanchett’s unusual glasses in this week’s Style Wrap Read more

Ministers skate on thin ice as Labor waits for a key policy mis-step, plus Bill Shorten’s strange choice of words in the Political Weekly Read more

This hurricane’s power is devastating. Let’s all go there

The weird habit that has people flocking to disaster zones, Earth’s close call and what animals would do if humans died Read more

During a cup of tea with Colin Lane, top chef Adam D’Sylva reveals what chefs really think of customers who complain about the food Read more

The last ever V8 Commodore is a fuel-guzzling monster

Holden’s fastest-ever Commodore is certainly not a family wagon. It’s a petrol head’s fantasy that makes one hell of a noise Read more

We may have qualified, but the Wales clash is no dead rubber

The Wallabies’ place in the Rugby World Cup quarter-finals is confirmed, but this match could be the key to winning the tournament Read more