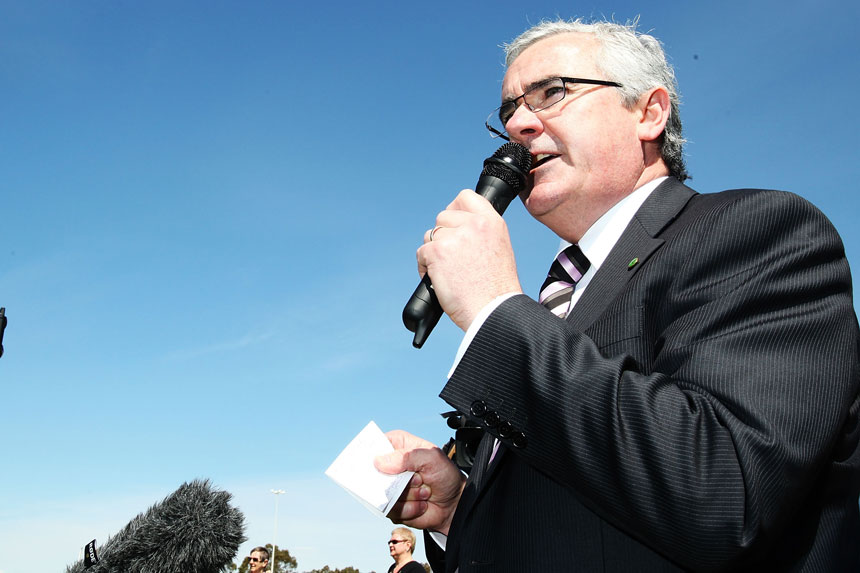 Independent MP Andrew Wilkie has called for a police investigation into former Labor minister Peter Garrett’s about-face on claims he was offered an improper payment from Clubs New South Wales.

Mr Garrett originally said a Clubs NSW representative handed him an envelope filled with “hundreds, if not thousands of dollars … but I gave it back”.

After an ABC investigation, the former minister changed his story and now says nothing illegal occurred, the envelope contained a cheque not cash, the event was before he was elected not after, and was hosted by the Labor Party not the clubs and Australian Hotel’s Association.

“It just beggars belief and I suppose I’d have to ask him straight: do you really think we’re mugs?”

Mr Garrett’s new recollection would make it less likely the payment was improper or illegal and more in the realm of a legitimate political donation.

However, he still maintains he gave the envelope back.

“I’m in the process of preparing letters to a range of NSW and federal agencies, asking them to have a look at this and to try and get to the bottom of it.

“Because on the face of it, some very serious criminal behaviour could have occurred,” he said.

“This appears it could be a systemic issue, not just to do with one particular person” he said, referring to comments by Dr Charles Livingstone, who revealed he had “been told by staffers and politicians themselves, that these sorts of payments are quite regularly received”.

Dr Livingstone claims first-hand accounts of two politicians at the federal level — an independent and a Liberal and 4 from NSW, three from Labor and one independent — who have been offered un-receipted cash payments or bribes from representatives of the poker machine industry.

In addition to a police investigation, Mr Wilkie said he believed the NSW matters may be a matter for the ICAC.

“Dr Livingstone is a very highly regarded researcher … he clearly knows of other misconduct but … probably needs to front some sort of inquiry where he can tell us what he knows and perhaps do it in a way that gives him protection from being bullied or even sued by another individual or perhaps some organisation within the poker machine industry,” Mr Wilkie said.