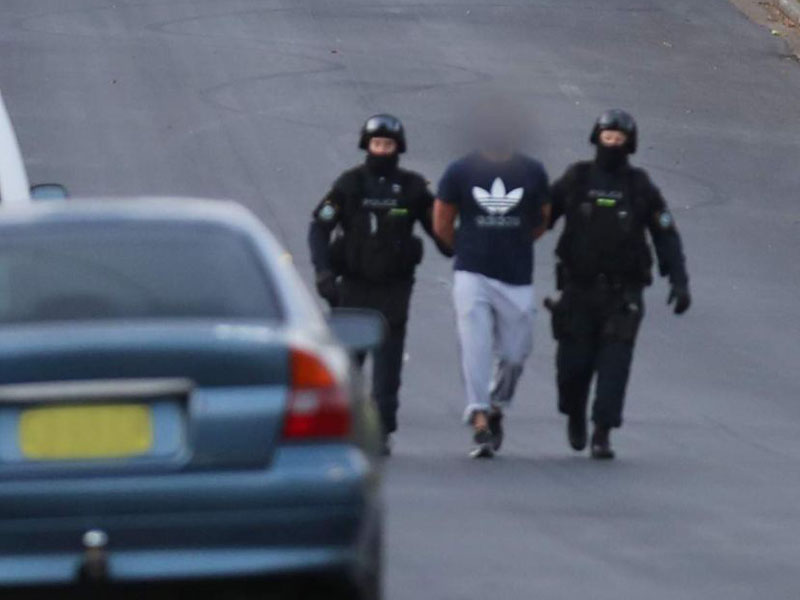 Police on Wednesday arrested four males aged between 16 and 22 in counter-terror raids across western Sydney.

A fifth person, a 24-year-old man from Merrylands, was also arrested on Wednesday morning but was not detained as part of the joint counter-terror raids operation.

He was arrested as a result of an outstanding warrant for identity fraud and other fraud matters.

Police allege the four men arrested in the counter-terrorism operation are directly linked to the fatal shooting of police accountant Curtis Cheng outside the Parramatta police HQ last Friday.

Eighteen-year-old Raban Alou was arrested at Lane Street, Wentworthville, the same home where his older brother Kawa was arrested in sweeping raids in September last year and released without charge.

Police also arrested a 16-year-old boy, who cannot be named for legal reasons and who was in the same year at Arthur Phillip High School as Farhad Khalil Mohammad Jabar, the 15-year-old who shot Mr Cheng.

At Marsfield, police arrested another target of the September 2014 raids, 22-year-old Mustafa Dirani, a former student of Arthur Phillip High.

On Wednesday afternoon police released two of the four who were arrested, both aged 22, after the detention period allowed in their warrants expired.

Police also returned on Wednesday morning to the Guildford home of Omarjan Azari, who is in jail on a charge of conspiracy to murder after being arrested in last year’s raids.

The 2014 raids were sparked by a phone call to Azari in which Australia’s most senior Islamic State lieutenant, Mohammad Ali Baryalei, allegedly directed him to kill a random member of the public.

Members of the group who were raided in 2014 and Baryalei, who has since been killed in Syria, were known to congregate at the Parramatta mosque where Farhad Jabar Khalil Mohammad spent several hours before he carried out last Friday’s attack.

The 15-year-old was shot and killed by police at the scene of the shooting.

Police are investigating where the gun came from and whether one of the four men arrested on Wednesday morning supplied it to the gunman.

NSW Police Force Deputy Commissioner Catherine Burn it was unclear whether or not the four arrested today inspired the terrorist attack on Parramatta Police HQ.

“We have certain suspicions and we are clearly going to have to sift through all of this over the next couple of days,” she said.

She said the motivation of the 15-year-old was still unknown but police definitely had the suspicion he did not act alone.

“What we are investigating is a terrorism offence so what we would suggest and we suspect is that there was some influence – whether it was ideologically, religious or politically motivated – that determined and influenced the 15-year-old to go and commit this horrendous act of violence,” she said.

But Ms Burn said the teen gunman had “not been a target of ours and is not somebody we would have assessed as a threat”.