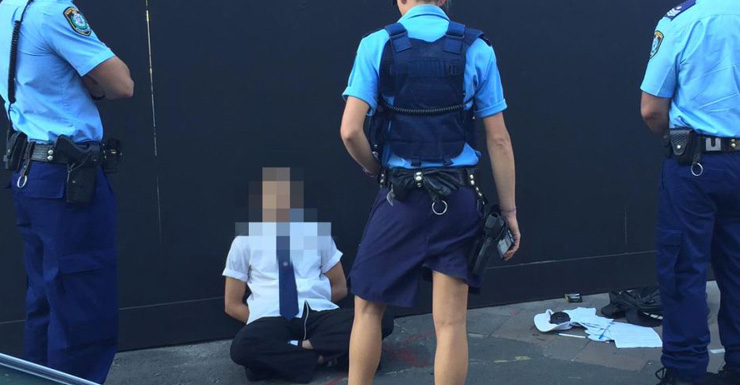 A student who allegedly threatened a Sydney police station on his Facebook page has been arrested on his way to the same school attended by the teenager who shot dead a police accountant last week.

Police said they spoke to the teenage boy on his way to Arthur Phillip High School in Parramatta on Tuesday morning in relation to alleged posts on social media.

They said the student then threatened and intimidated police and he was arrested.

It comes after Farhad Jabar Khalil Mohammad shot and killed 17-year police force veteran and accountant Curtis Cheng at close range outside the NSW Police headquarters in Parramatta on Friday.

The Year 10 student was killed by police in front of the building after he shot dead Mr Cheng.

There was a heavy police presence at the school on Tuesday morning which is just metres from the scene of last week’s fatal shooting.

On Saturday, the teenager arrested on Tuesday morning allegedly posted a video on Facebook of Police Commissioner Andrew Scipione addressing the public about the shooting with the caption “merryland [sic] police station is next hope they all burn in hell”.

The student arrested on Tuesday morning had his belongings emptied on the footpath.

He was handcuffed and taken in a police van to Parramatta Police Station.

At the time, the student told the ABC that police had taken offence to him videoing them on his mobile phone.

The ABC saw a senior police inspector looking at the content of the boy’s mobile phone.

Students at Arthur Phillip High School returned for the first time on Tuesday since the fatal shooting last week.

The NSW Department of Education is offering counselling services to students and teachers.

A number of students expressed their shock at the shooting incident, describing Farhad as quiet, polite and “a nice kid”.

Students who knew Farhad said he enjoyed playing basketball at the school.

Premier Mike Baird has vowed to track down anyone who helped or encouraged teenage gunman Farhad to carry out the attack.

“I find it incredible to think that a 15-year-old boy could undertake this action without any form of help or assistance or encouragement,” he said.

“And I can assure you that if he was … those people who have undertaken any inciting or any encouragement to undertake such a horrendous crime, we will track them down and they will face the full consequences.”

But Mr Baird would not say whether police had made progress trying to find the teenager’s sister, who is understood to have travelled to Turkey and may be trying to reach Iraq or Syria.

The Premier said he has visited the family of Mr Cheng and said he wanted to do everything possible to stop similar attacks.

“I’ve had an opportunity on the weekend to spend time with the Cheng family and you can imagine the grief that they are going through,” Mr Baird said.

“They lost a wonderful man, a father, a husband for no reason.. who was completely and utterly innocent.”