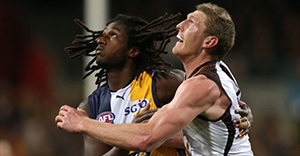 There’s finally a good reason to switch to Apple

Abandon the Android, nix the Nokia and banish the Blackberry. This is the best premium smartphone on the market Read mor

This ad is the best on television today

Company shirks the advertising norm to produce something inspiring. But can anyone remember what is being advertised? Read more

Jason Akermanis: what it’s like to prepare for an AFL grand final

No matter what your favourite sport, there are some things we can all agree on: the unwritten rules of the grand final barbecue Read more

If Hawthorn can win the midfield battle, a third successive premiership – and fourth since 2008 – is on the cards Read more

There’s a revolution in rugby union and it’s being led by Israel Folau and Sam Burgess. Here’s why rugby league should be worried Read more

This week in science: How we survived the end of the world

As doomsayers get excited over a blood moon, scientists test their Earth-saving capabilities with a mission to divert a large asteroid Read more