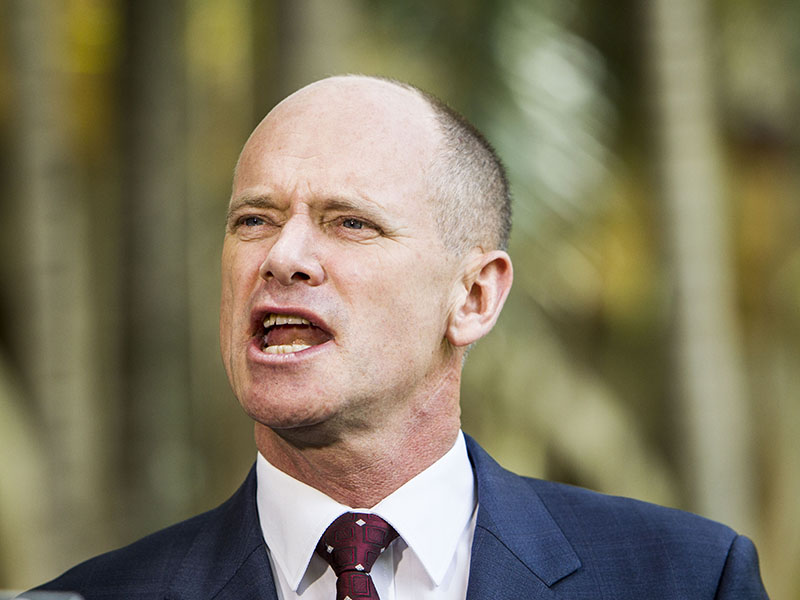 Campbell Newman has called for the states to collect a share of income tax as part of a bold strategy to reform the federation and save billions of dollars in waste.

Joining the national tax debate, the former Queensland premier revived his personal campaign for the states to be given full control over the delivery of key services such as education and health.

He said the states were already primarily responsible for providing these frontline services but the federal government continued to duplicate the roles by operating huge bureaucracies at great expense.

A smarter option would be for the federal government to step aside altogether and then the states could receive a share of existing income tax revenue to pay for the services, he said.

Under such an agreement, Canberra’s income tax take would be reduced accordingly “so the taxpayer would see nothing different”.

“But first there needs to be significant changes to federal-state responsibilities which, by cutting out duplication and waste, would save an estimated $20-80 billion a year,” Mr Newman told The New Daily.

The one-term Queensland premier and former Brisbane lord mayor was speaking ahead of next week’s official launch of his authorised biography, Can Do: Campbell Newman and the challenge of reform, which reflects on his 13 years in public office.

Under the Australian Constitution, the states have always had the right to raise income tax. However, this responsibility was ceded to the Commonwealth during World War II and never reclaimed.

The National Commission of Audit has also floated the radical concept of the states gaining access to the income tax base.

Mr Newman has been an ardent campaigner for federation reform and greater financial independence for the states, especially during his time as premier.

His comments come as the new Turnbull government continues to wrestle with the issue of tax reform – and the possibility of a GST overhaul – to boost Australia’s sluggish economy.

Mr Newman said he opposed tax increases, including the GST, because enough savings could be found if both levels of government reduced duplication and inefficiency.

There was “too much blurring of the lines” and Canberra had deeply encroached on what was traditionally state territory under the original federation agreement.

“Federal and state responsibilities now double up in many areas, resulting in waste, confusion and costing billions of dollars in unnecessary bureaucracy,” he said.

“Every Australian is currently losing out. As a nation, we should be clearly defining which level of government delivers education and health services, as well as who should build our roads, rail, ports, electricity and water supplies. “

Mr Newman was interviewed by The New Daily as part of a promotional campaign for his biography, which he described as  “a frank assessment” of his time in public life.

Where is he now?

Since leaving office, he has vowed never to return to politics and recently turned to a career in agricultural robotics. He is currently chairman of Swarmfarm Robotics, a new Queeensland-based company that believes small, lightweight robots are the key to the future of farming.

A self-confessed computer nerd, he has also acquired an interest in a cloud technology company.

“I got up the day after our election loss with a profound feeling of relief. I had got my life back,” he said. “I’m again Campbell Newman, private citizen – and I’m loving it.”

The book explains how he swept to power in the 2012 election landslide and subsequently lost Australia’s largest parliamentary majority after “getting the policies right but the politics wrong” over three tumultuous years as premier.

He also reveals in the book his belief that the LNP could have held on to office had the party hierarchy accepted his offer to resign before the January 2015 election, which saw the Annastacia Palaszczuk-led Labor Party secure government by relying on the support of independents.

On his time in government:

There were, of course, highs and lows and I freely admit we made some politically dud decisions in state government but we genuinely felt we were acting in the best interests of all Queenslanders.

Yes, mistakes were made and, even if they were made by other people, I take full responsibility for them because the buck stops with the leader. We were upfront with people – sometimes in your face – and we made hard decisions but they had to be done and they still have to be done.

I think Tony Abbott, Kevin Rudd and Julia Gillard all had an unduly difficult – and sometimes unfair – time in office.

I was one of the most popular political figures in Australia when  elected and then a relentless campaign to tear me down occurred.

To be honest, that hurt. But maybe it’s because of the community’s tougher attitude towards politicians, as well as the often malicious use of social media and the way personality politics is now played in preference to good policy debate.

Sadly, it is proving extremely difficult in Australia today to have a meaningful conversation with the community and that’s really scary at a time when, more than ever, there is a real need for reform.

We are losing ground economically at the moment. People’s real incomes are dropping and that’s one of the reasons why they are actually rather cranky … they had more money in their pockets in real terms probably 10 years ago and they have been gradually losing ground.

We are not dealing with the  issues that could improve the liveability, the lifestyle and the economic and general wellbeing of all Australians.

The media has fallen victim to what I call “clickbait coverage” where the pursuit of ratings means they would much prefer to publish sensational stories to grab people’s attention rather than some argument for change in government policy.

Journalists are being driven by the need to get people clicking on their stories online, so the more outrageous and inflammatory, the better the ratings.

I understand the pressures the media is under and I don’t blame them entirely for my government’s election loss, but it’s hard to communicate the need for change to the public when the media has such a short attention span.

And I don’t resile from my view that the commercial TV stations, in particular, are treating politics like some sort of reality show.

My government was punished in the polls for doing too much too fast, yet the latest opinion polls seem to be rewarding the Palaszczuk Government for avoiding controversy.

Labor has not outlined a clear plan nor direction yet has improved its public opinion rating.

So the message seems to be that the less you do, the less you tackle vested interests and the less you undertake reform, then the more you’ll be rewarded in the polls.