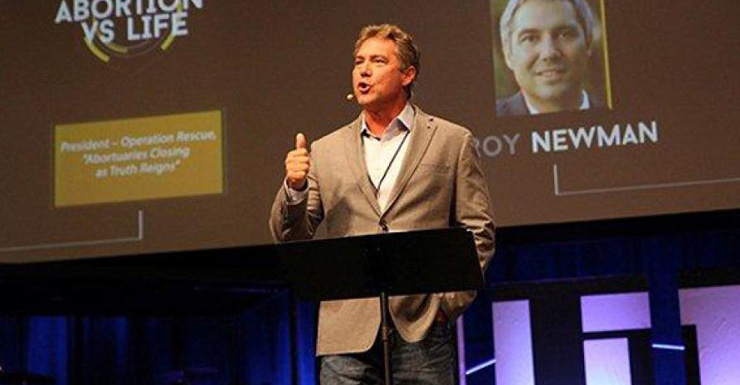 American anti-abortion activist Troy Newman has been detained at Melbourne Airport, after travelling to Australia even though his visa had been cancelled.

Mr Newman, who has questioned why doctors who abort babies are not executed, had his visa cancelled by the Immigration Department yesterday and was stopped from getting on a flight in Denver.

But the ABC understands he flew on a United Airlines flight, and a spokeswoman for Immigration Minister Peter Dutton said the airline now faces a fine for carriage of a person who does not hold a valid visa.

“Since Mr Newman-Mariotti does not hold a visa, he is unable to enter Australia and remains in the presence of ABF (Australian Border Force) officials at the Melbourne Airport pending his removal,” the spokeswoman said.

She said an injunction was lodged in the Federal Court seeking to stop the government from preventing him entering.

Mr Newman is the head of anti-abortion organisation Operation Rescue and was due to speak at events run by the group Right to Life Australia around the country.

He said the decision to revoke his visa yesterday was “based on a pile of lies, including the idea that I promote violence”.

“My 25-year history of peaceful, prayerful action speaks for itself,” he said.

“Please pray that we can get past immigration so the truth can be told throughout Australia.”

Several Australian politicians, including Labor backbencher Terri Butler, had called for Mr Newman to be banned from entering the country.

“I am concerned that Mr Newman’s presence in Australia will cause significant harm to our community,” Ms Butler said in a letter to the Immigration Minister.

“I am most concerned that Mr Newman’s call for abortionists to be executed could lead to threats or the commission of acts of violence against women and medical professionals.”

Mr Newman is the co-author of the book Their Blood Cries Out, which was published in 2000.

In the book he questions why doctors who perform abortions are not executed and asks why women or men who request the procedure are not charged with murder.

On Sunday, it was confirmed the Australian government had blocked US singer Chris Brown from entering the country because of his history of domestic violence.