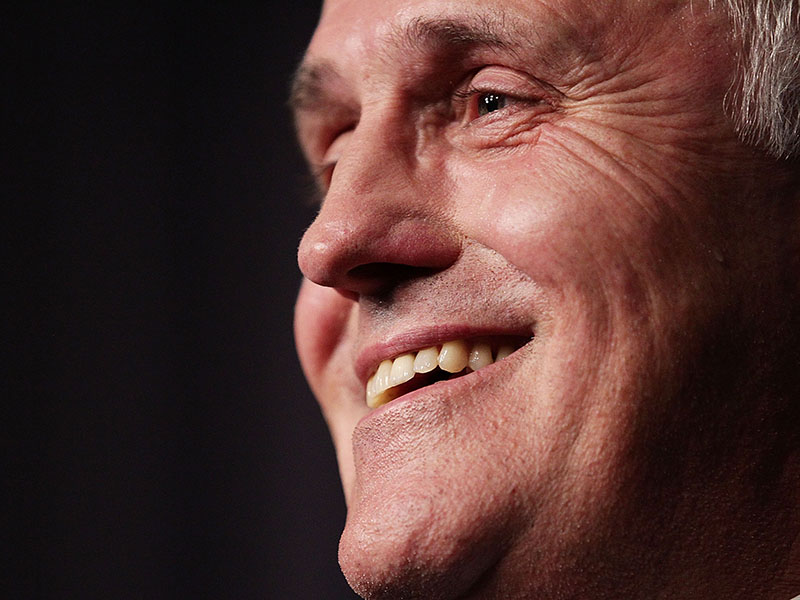 A wise, old headmaster used to offer the same piece of advice at the start of the school year to any new teacher who’d joined his staff over summer.

As a nervous newbie prepared to enter the classroom for the first time, the principal would pull them aside and whisper conspiratorially: “Don’t smile until Easter.”

His logic was simple – smiling too much, too early, eroded authority. Give it eight weeks or so, otherwise students would think them a pushover and take advantage of their good nature.

Clearly no-one ever gave Malcolm Turnbull that advice. He’s only been the nation’s leader for a couple of weeks, but I feel confident saying this: no PM has smiled more in their first fortnight.

And what a smile it is – a 100-watt, pearly-white, gleaming-grin of a thing that dazzles all who gaze upon it. I haven’t seen anything like it since Tom Cruise was bouncing about on Oprah’s couch.

It started within minutes of Turnbull claiming the leadership and has rarely let up since.

The new PM has grinned his way through press conferences, question time, even a 7.30 interview with Leigh Sales, the sort of events that used to turn Tony Abbott to stone.

Having spent too much time in front of TV screens as a kid, I find myself recalling Get Smart’s Simon the Likeable who wins over everyone with an irresistible glint in his eye. (It would be churlish to mention Simon turns out to be a villain. But you can watch the video below.)

All this smiling is a refreshing change from the dour, dark countenance of Abbott.

In the last months of his leadership, the former PM’s set jaw and set-pieces made for downbeat viewing – it was as if a terrorist attack was forever imminent.

When he did smile, it was usually with the mouth, but rarely with the eyes.

It’s an important distinction, first identified by French anatomist Guillaume Duchenne in the 19th century. He wrote in 1862 that a true smile involves two key muscles, the zygomatic major in the cheek, and the orbicularis oculi around the eye socket. It’s easy enough to get the first one working, but you can’t really fake the second. “Its inertia in smiling,” Duchenne wrote, “unmasks a false friend.”

Which begs the question: how much of Turnbull’s grinning is real and how much of it is forced or, at least, pre-meditated? Quite a lot, I suspect, if only because there’s little to lose from it as he seeks to lift the mood of the nation. Grinners are winners.

Seeing our new PM smiling shores up his constant mantra of optimism and positivity. It would be a little odd if he preached one thing and acted another. In the same way, Abbott couldn’t smile because he was always engendering fear. Or, at least, he seemed to be at the end.

Smiling probably makes Turnbull feel better too. Some studies have suggested the brain doesn’t really distinguish between a real Duchenne smile and a fake one. Psychologists will often suggest lifting one’s mood by, in effect, faking a smile. Try it the next time your footy team loses.

Seeing a smile makes us feel better too, because it’s infectious. Who hasn’t had their mood lifted by a grinner or a giggler?

Of course, there are risks associated with this smiling strategy. The first and most obvious one is that the PM better pick his occasions. If he’s captured grinning at, say, an announcement of troop casualties or worsening unemployment figures, voters will grow impatient.

Fortunately he seems to have already learned that lesson. Turnbull was suitably subdued at the recent announcement of his domestic violence initiatives.

Ultimately the PM’s mood needs to reflect that of the country he governs. It’s one thing to try to engender confidence and optimism, but if the place is going to hell in a hand-basket, voters will be looking to him to empathise with them and their fears.

Of course, there might come a time when the sheer weight of the job weighs Turnbull down and we’ll hark back to the days when he was forever smiling.

Until then, I’ll take the glass half-full Turnbull over his glass half-empty predecessor anytime.

It immediately sends a message that we no longer live in Abbott’s Australia – grim, difficult and demanding – but have been miraculously transported to a fabulous country living in exciting, if challenging, times. (Even if that may not be true.)

We should all relax a little and enjoy them…until something comes along and wipes the smiles off our faces.