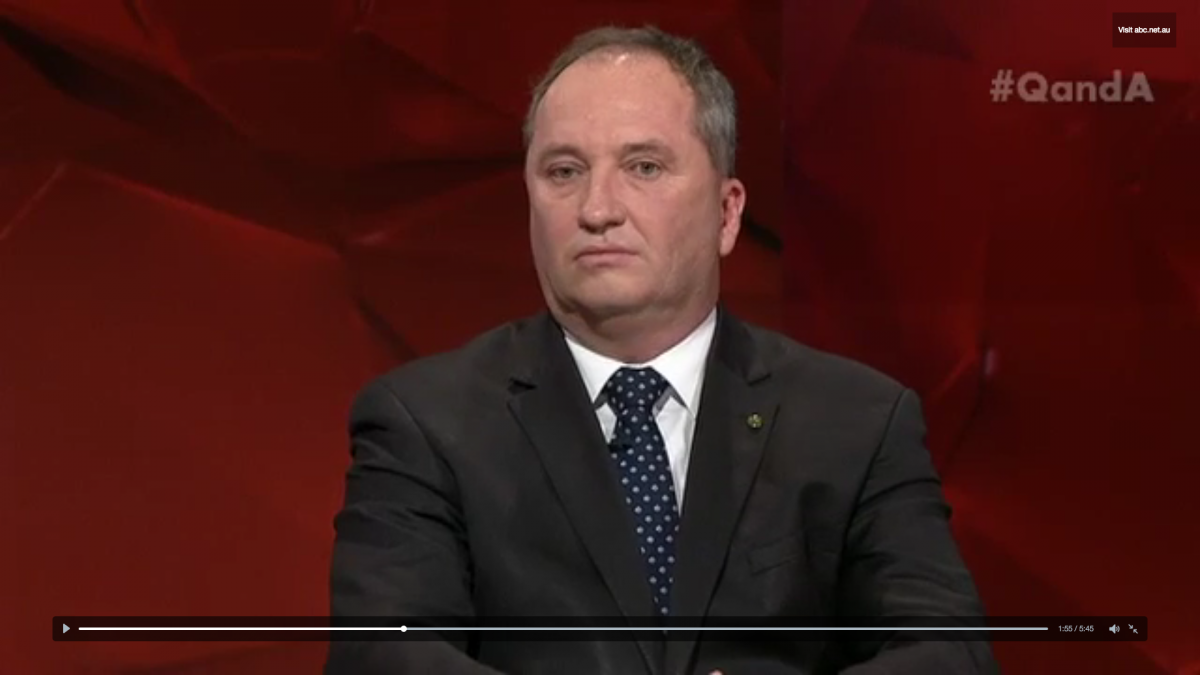 Nationals MP Barnaby Joyce has said it would have been better if Tony Abbott had stepped down voluntarily, rather than waiting to be ousted by the Liberal party room.

The Agriculture Minister also stoked the fires of political intrigue by declaring that Opposition Leader Bill Shorten is “finished”.

The leadership spill, abortion, domestic violence and the Medicare Benefits review were also discussed in a wide-ranging episode of Q&A on Monday night.

Mr Joyce said it was not the right move, instead suggesting former PM Tony Abbott should have stepped down.

“I don’t believe it is right… to change leaders through a process of intrigue. I think that what would have been better, to be honest, is if Tony had stepped down, it was becoming quite clear that the polls were saying it was unlikely he would be able to win. I don’t think Tony would have taken us over a cliff,” Mr Joyce said.

“Within the Cabinet, I have always believed there were two giants in the room – one was Abbott, one was Turnbull. We have had Abbott, now we’ve got Turnbull.

“[Mr Turnbull] was allowed to do it. That’s part of the process, he is allowed, there are two checks and balances on power – one is you people, the other is within the Government itself.”

One questioner raised concerns with a ‘growing leftism’ within Australian politics, illustrated by the jump in the polls once Mr Turnbull was installed as leader.

Between a September 7 survey and one following the September 14 leadership spill, the Coalition jumped from 39 per cent to 44 per cent in the two-party-preferred standings.

As preferred prime minister, Mr Abbott was behind Bill Shorten 37 per cent to 41 per cent.

There was a massive shift once Mr Turnbull entered the picture, with a poll early last week putting him ahead at 55 per cent to 21 per cent for Mr Shorten.

Mr Marr said it had a lot to do with the desires of “mainstream Australia”.

“One of the reasons Tony Abbott failed is that his presentation of the notion of what Australia is just doesn’t square with Australians,” he said.

“That gap that was showing up week after week after month after month in the polls, that steady gap was really the Australian nation saying: ‘We don’t see ourselves like you do’.

“But I wouldn’t remotely call that left wing. It’s just not as conservative as it was and we have yet to see, of course, what his party room will actually allow him to do.”

‘They are scheming and plotting right now’

He said he could not measure up to the force of Mr Turnbull’s popularity.

“Bill Shorten is finished. It is just a matter of when it’s going to happen,” he said.

“They have three parts to this replacement. First is they will get into the Labor Party room and rescind the Rudd motion, then they will declare positions vacant and elect a different leader. That

will happen before the next election. They are scheming and plotting now.”

Domestic violence was a topic that dominated the headlines again in the past week, following three deaths in three days in New South Wales believed to be linked to family violence and the release of coroner’s findings on Luke Batty’s death.

US performer Chris Brown was also banned from entering Australia in relation to his 2009 convictions for assaulting singer and former girlfriend Rihanna.

“This might seem a bit quaint and a bit ‘whoopee’ but we have to start changing our attitude all the time in how we deal with women,” he said.

“Don’t swear in front of them, it is not politically incorrect to open a door.

“All these things we can change the attitude so we can show we respect people because if you don’t respect from a younger age, then how are you going to develop it later on?”

The comments were later labelled outdated and “a retro throwback”.

Ms King called on the money to go towards services, an area she felt was neglected.

“Our services are overwhelmed and women are being turned away every single day. The money needs to go to services,” she said.

Criminalisation of the right for women to choose

There is a “double standard” in the laws around abortion, according to Ms Macgregor.

“We all know it is happening and yet there is still a risk of criminalisation,” she said.

Over-the-phone abortion consultation was recently offered to women in regional and remote areas.

Mr Marr said this initiative should be accepted, as many other medical procedures also offered phone consults.

“Abortion laws are one of the now quite small group of laws in this country where religious belief is directly expressed through criminal law,” he said.

“My view is they should all go, that the criminal law has no place in this area.

“I myself cannot see why the decision whether to terminate – the extremely painful, personal, difficult decision about terminating a pregnancy can’t be made over the phone when necessary from a remote area.”

Just waiting for the day when someone says “Sure, he bashes his missus, but on the other hand he’s a great plumber!” #qanda — Joe Hildebrand (@Joe_Hildebrand) September 28, 2015

Men decreeing women can’t choose to have an abortion makes my head explode with anger. #qanda Q&A: ‘Tony wouldn’t have taken us over the cliff’