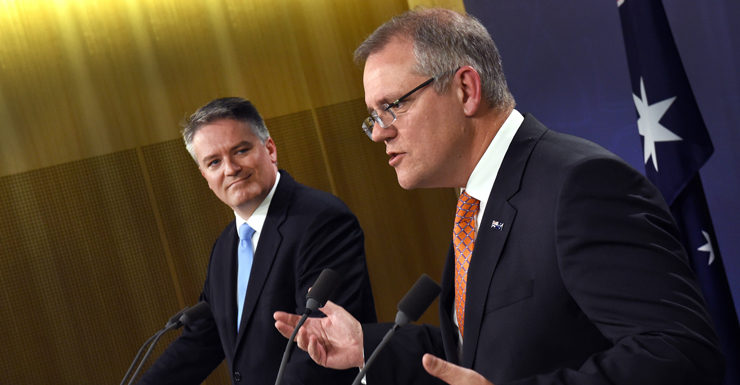 Speaking at the Sydney Institute on Monday, Mr Cormann said spending must be reduced to an average of 24 per cent of GDP over time, at the most.

“There is no easy way to repair the budget, as suggested by some, just by slashing the public service,” Mr Cormann told the audience.

“But to ensure Federal Government expenditure is affordable in our economy and doesn’t force us into higher taxes overall, over time we need to get back to an average level of government expenditure of about 24 per cent as a share of GDP, at the most, and stabilise it at that level.

“Spending under the Coalition is too high … there is much, much more work to do.”

Mr Cormann referred to former PM John Howard, saying during his final year, spending as a share of GDP was 23.1 per cent, and during his entire term, expenditure averaged at about 24 per cent.

He said 40 per cent of the measures in the most recent budget remain unlegislated.

The new-look government’s first priority will be the families package, which had been the focus on negotiations with the Senate cross bench, he said.

The speech comes after new figures released by the government showed the budget could blow out by almost $60 billion under a Labor government, due to blocked savings measures and spending commitments.

Earlier on Monday, Treasurer Scott Morrison accused Labor of wanting to hike taxes in order to spend more, while his government wanted to encourage people to “work, save and invest”.

“The tax system isn’t there to meet the government’s spending aspirations – it’s there to unblock Australia’s economic aspirations,” he said.

Meanwhile, Shadow Treasurer Chris Bowen said the long term health of the budget relied on both cutting back spending and revenue raising.

“Mr Morrison has been in denial saying he just cut his way to the future,” he said in Brisbane.

The government is committed to releasing the mid-year budget outlook statement on time in December, despite the change in Prime Minister and Treasurer.