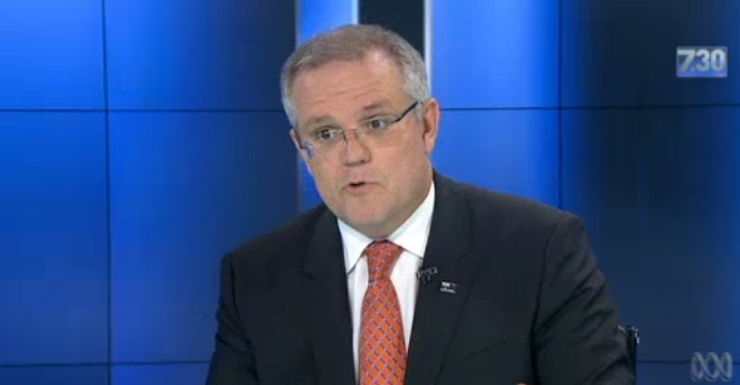 Scott Morrison’s first public performance as Treasurer has been greeted with anger and disdain.

On Wednesday night, ABC presenter Leigh Sales questioned Mr Morrison intently about the state of the nation’s economy and the government’s budget.

Many viewers were not impressed.

During the interview, Mr Morrison claimed he must focus on what he can control, which was spending, something for which the Abbott government was widely criticised.

Ms Sales got straight into the issues, commenting on a press conference by Mr Morrison earlier on Wednesday where he said Australia did not have a revenue problem.

“I hate to be the bearer of bad news, but you have a spending problem and a revenue problem,” she said.

“Well it all depends on how you describe the revenue challenges, but the spending challenges are very significant,” Mr Morrison responded.

“I’m not going to give myself a leave pass as Treasurer on constantly trying to ensure that we spend taxpayers’ money the best way we can and we raise as little as we need of it and we spend as little as we have to of it to ensure we get the right balance.

“You want to raise more taxes, that’s usually code for wanting to spend more money. And I just don’t think we can give ourselves as a government and I don’t think states can give themselves the leave pass of not focusing on what’s within their control.

“What’s within our control is how much money of the taxpayers we spend.”

Australian economist Stephen Koukoulas weighed in on the debate, accusing the Liberal government of contributing to the problem.

“Morrison is spot on. The bulk of the budget issue is govt spending,” Mr Koukoulas wrote on Twitter.

“Hockey and Abbott spent quite incredibly. That is the issue.

“Morrison would be wise to look at spending levels of Labor govt. Budget would be in surplus next year if they got back there.

“The simple point is that under Abbott, govt spending surged, tax revenue also rose but not as quickly & budget remained in deficit.”

Ms Sales put to Mr Morrison that the bigger issue was revenue, with experts warning the gap between revenue and spending was widening.

“But my point about revenue measures and spending measures is there is a tendency to think, ‘well, we can deal with the budget issue just by jacking up taxes on everyone’ and that’s not an approach that I intend to follow,” Mr Morrison responded.

Ms Sales attempted to bring the Treasurer back to the initial question, which he was avoiding.

“So I’m trying to get back to first principles here … which is that you have to tackle spending and revenue,” she said.

A frustrated Mr Morrison continued to claim Ms Sales was suggesting the government must increase taxes.

Later in the interview, he attributed the Coalition’s big spending bill on an exuberant $154 billion social services bill, due to an ageing population.

“But what you’re saying basically, Treasurer, to Australians is, ‘make no mistake about it, we are going to be cutting government spending and government services that you are used to’,” Ms Sales responded.

Viewers were disappointed in the Treasurer’s manner during the interview, which they said was “aggro” and “overbearing”.

On Thursday morning, a Labor party spokesman said Mr Morrison “struggled”, but said he would wait to see what the new Treasurer delivered in future.

“But you judge a Treasurer on his performance not his words.”

Whoops. Morrison not looking at labour force data. Acknowledging the labour market is weak is sort of important #abc730

Ah. Morrison now on wrong track. It is not welfare where the spending problem is. #abc730 — Stephen Koukoulas (@TheKouk) September 23, 2015

abc7.30 Morrison still using Abbott’s bully boy tactics women are there to be talked over, made a fool of himself, very scared I’d say

.@neil_watt @ScottMorrisonMP We DO HAVE a revenue problem. Ken Henry says so. I trust Henry over Morrison on the economy #abc730 — Ros (@roshart) September 23, 2015

I dont agree with reality leigh. Thats just your take and the numbers I told you were happening. hahahaha. Sack this moron now #abc730

Treasurer @ScottMorrisonMP‘s response to @leighsales‘ recitation of economic figures: “That’s your take on what all that means.” #abc730 — ABC News Intern (@ABCnewsIntern) September 23, 2015

– @sspencer_63 That ScoMo interview was as bad as Abbott’s last one on #abc730 Embarrassing.

Nothing has changed, so far, with Turnbull as PM. Morrison doesn’t know what he’s talking about, and he is the Treasurer. #abc730 — QC (@ChristineEwing7) September 23, 2015

Dear New Turnbull Gov’t, I am decidely *not* reassured by Treasurer ScoMo’s performance on #abc730 tonight. Me thinks the honeymoon is over