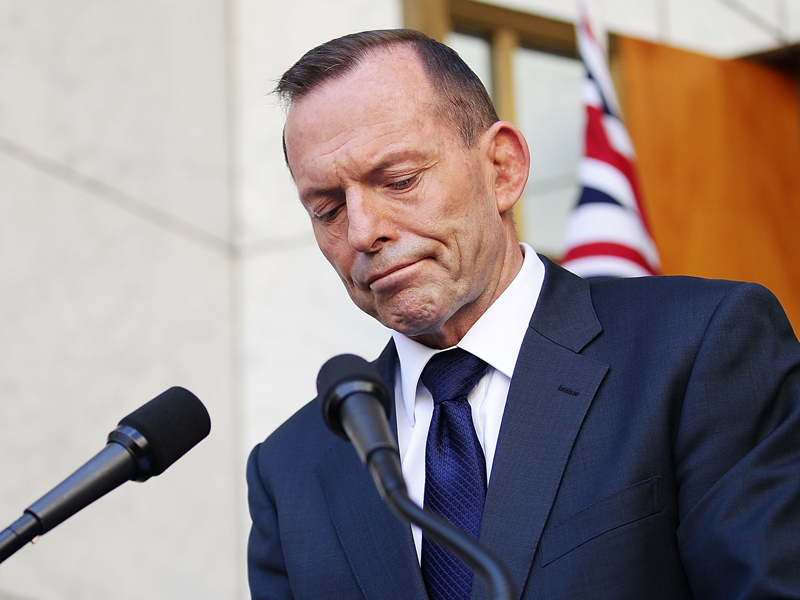 In the end it came down to a steely speech, delivered alone, which earned little more than polite applause from the gathered media at its conclusion.

Vanquished Prime Minister Tony Abbott spent 18 hours behind closed doors after losing his job, but when he emerged it was with a cool demeanour to recount the achievements of a government that fell before it reached it second birthday.

“When you join the game, you accept the rules,” he said, adding that there would be “no wrecking” of new Prime Minister Malcolm Turnbull.

• Malcolm Turnbull prepares to take power
• Where is Tony Abbott?
• The life of Tony Abbott as Liberal Party leader

“I’ve never leaked or backgrounded against anyone. And I certainly won’t start now,” he told reporters gathered in the Prime Ministerial courtyard on Tuesday.

“Our country deserves better than that. I want our government and our country to succeed.”

‘The media helped bring me down’

The bitterness of defeat was largely hidden in Mr Abbott’s words, and his presentation free of the emotion that characterised the farewell speeches of Kevin Rudd and Julia Gillard.

“My pledge today is to make this change as easy as I can. There will be no wrecking, no undermining and no sniping,” Mr Abbott said.

But he did not fail to identify some of those he felt helped to precipitate his downfall, blaming “a febrile media culture” that “rewards treachery”.

“We have more polls and more commentary than ever before. Mostly sour, bitter, character assassination. Poll driven comment has produced a revolving door Prime Ministership which can’t be good for our country,” Mr Abbott said.

“And if there’s one piece of advice I can give to the media, it’s this: refuse to print self-serving claims that the person making them won’t put his or her name to. Refuse to connive at dishonour by acting as the assassin’s knife.”

No mention of Turnbull

Mr Abbott stopped short of giving the new Prime Minister his explicit support; in fact, he made no mention of Malcolm Turnbull in his resignation speech.

He defended the accomplishments of his two-year term, while admitting his government “wasn’t perfect”.

Mr Abbott came to office after defeating the Kevin Rudd Labor government in the September 2013 election.

He was in office for one year, 11 months and 28 days, making him the shortest-serving PM since Harold Holt.

Mr Abbott cited as his achievements the creation of jobs, the removal of “Labor’s bad taxes”, the signing of trade agreements, infrastructure programs, casting a “spotlight” on alleged union corruption, his response to terrorism, budget repair, the deployment of troops to the Middle East and the fact he “stopped the boats”.

“I have rendered all and I am proud of my service. My love for this country is as strong as ever,” Mr Abbott said.

Mr Abbott’s reign was riddled with controversy and instability triggered by the controversial 2014 federal budget. The proposed Medicare co-payment, cuts to the ABC and SBS and reforms to university degree costs were among the biggest points of derision.

He was also slammed for perceived “captain’s calls”, like knighting Prince Philip and installing Bronwyn Bishop as the Speaker.

Mr Abbott made no mention of these contentious issues.

His regrets were being unable to do more for Indigenous communities and not being able to do more to curb ice addiction, the “cauldron” of violence in the Middle East and instability in the region. But he insisted he was “proud”.

“Yes, I am proud of what the Abbott government has achieved,” he said.

In closing, the outgoing leader thanked his family, his staff, the Liberal party and the Australian armed forces “who are serving our country and defending our values, even as we speak.”

He saved his parting shot for those who attacked his chief of staff, Peta Credlin.

“I thank my staff, who have been absolutely unceasing in their devotion to our party and our country,” Mr Abbott said, adding: “Especially my chief of staff, who has been unfairly maligned by people who should’ve known better.” There’ll be no wrecking: Abbott