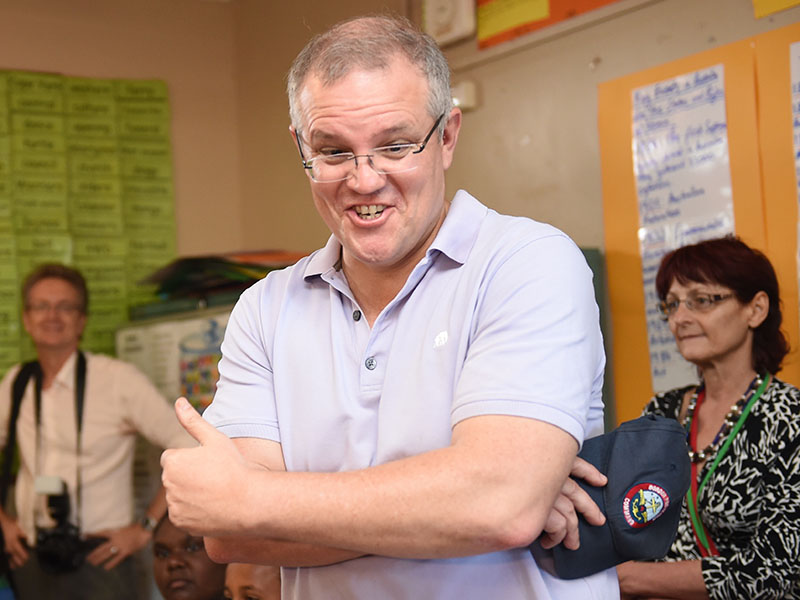 While prime minister Tony Abbott’s performance on indigenous affairs remains underwhelming, so was the sense of humour of one cabinet minister this week who seemed particularly excited to accompany the PM on the Boys’ Own Adventure to Australia’s north.

Former Immigration and Border Protection Minister Scott Morrison posted a photo on Twitter of a boat on the high seas with the caption: “Enroute to Bamaga from Thursday Island on Border Force One with PM”.

Social media participants howled down the minister for using a photo of a boat that wasn’t part of the Border Force fleet or even in a part of the ocean that was remotely near Australia.

They objected in particular to the minister making light of the government’s border protection activities.

ScoMo suggested in a subsequent tweet that some of the Twitterati were having a humour failure and should cheer up.

That may be so, but the wannabe Liberal leader should also sack his joke writer.

Enroute to Bamaga from Thursday Island on Border Force One with PM pic.twitter.com/XjDLGkv7K1

Tony Abbott was up north doing a lot of nodding as indigenous leaders talked to him about the issues that continue to plague their people.

There were various picture opportunities with smiling Cape York kids and ministers getting their shiny RMs dirty while participating in some good honest manual labour.

But given the government ripped over $500 million from programs and services for Aboriginal people in the 2014 budget, the PM needs to do a lot more than drag senior public servants to remote locations to paint the walls of a local community centre before he can legitimately claim his self-appointed title of Prime Minister for Indigenous Affairs.

Over in Western Australia, the battle for the outer metropolitan federal electorate of Canning got underway. The ABC’s election guru Antony Green has already kicked off a special blog for the by-election, which will take place on 19 September and is being touted by political observers as a test for PM Abbott.

All manner of campaigning shenanigans have already occurred, with one media outlet getting in early with a bit of mud-throwing at the Liberal candidate.

In fact the Liberals should be relieved at the early airing of the sordid suggestion that their cleanskin candidate was involved in the mutilation of corpses during his time as an Australian SAS officer in Iraq.

If the information had not been published until election day, the Libs would have had no time to refute the allegation, and it could have been damaging enough to tip the close-run election in Labor’s favour.

In response to suggestions by Labor leader Bill Shorten that Mr Abbott was in witness protection and being kept as far away from Canning as possible, the PM said “life is pretty busy and you never know what’s going to come up, but certainly it is my intention to be there”.

No doubt any final decision to attend will be influenced by the Liberal Party’s private polling in Canning and how Mr Abbott is perceived by the locals.

Meanwhile, someone who no longer has to worry about electoral viability, former prime minister Julia Gillard, appeared on our screens this week to say she’d changed her mind on gay marriage. However, this change of heart was not widely welcomed.

Whether Ms Gillard’s original opposition was indeed based on feminist principles or a deal done to placate conservative unionists, it squandered the best opportunity Australia had to achieve marriage equality. Her conversion to the cause is too little, too late.

When the going gets tough, politicians go to war

It’s no surprise the Liberal Party chose a military man as the candidate for Canning. National security remains one of the Government’s few strengths in the eyes of disgruntled voters, and it will seemingly do whatever is necessary to reinforce that view. It will apparently even go as far as requesting to be asked to join US air strikes in Syria.

However, when pressed by journalists to confirm whether a request to be asked came directly from his office, the PM said “I can confirm that I’ve been dreadfully concerned about this death cult ever since it swept out of Syria into northern Iraq, executing thousands, beheading, crucifying, enslaving people”.

We’ll take that as a “maybe” then.

The final arena in the three-ring circus this week was the union royal commission.

Not that the inquiry held any hearings, for it is suspended while Commissioner Dyson Heydon decides whether or not to disqualify himself from further proceedings due to a perception of bias.

For those watching this saga become more unedifying by the day, it is becoming increasingly apparent that Mr Heydon will stand aside.

Certainly the longer he takes to make a decision, the more difficult it’s going to be for him to stay.

But perhaps even more awkward than Heydon’s vacillations are for the government, the words of former Labor minister and ACTU leader Martin Ferguson were even more so for the Opposition.

Mr Ferguson strayed (yet again) from the party line this week, refusing to join his colleagues in condemning the union royal commission as a witch-hunt.

He helpfully told the ABC: “I just don’t see the royal commission as a political plaything. I actually think it’s potentially going to be very important in reforming the trade union movement and the Labor Party — and I will not damn it.”