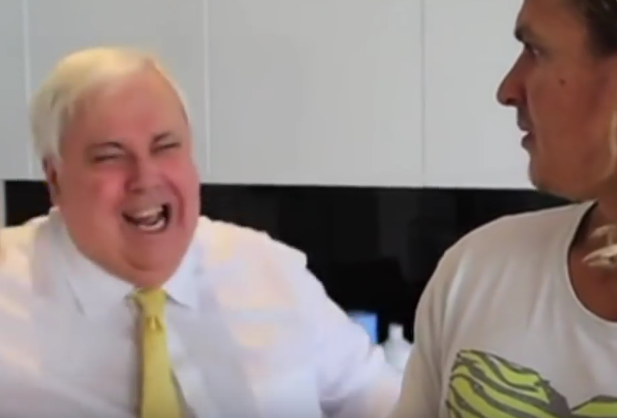 Independent Queensland MP Clive Palmer has once more tightened his grip on the mantle of Australia’s loosest parliamentarian.

In his most unusual video appearance yet, Mr Palmer dances in a rabbit costume to cheesy disco music, and rubs peanut butter onto a cardboard cut-out of Prime Minister Tony Abbott’s face.

For someone who has ‘twerked’ while being filmed on live radio and posted a truly bizarre yet infamous ‘Bye Bye Bronwyn (Bishop)’ video, even weirder footage should be impossible.

But he has surprised us all. Or maybe, given his form, he hasn’t?

With the help of Perth radio station Hit929, Mr Palmer has participated in some sort of parody campaign video that one-ups everything he has done before.

Between the weird facial expressions, the ill-fitting rabbit costume and the crimes committed via peanut butter, there is a lot to take in.

Check it out below, and you’ll see what we mean: