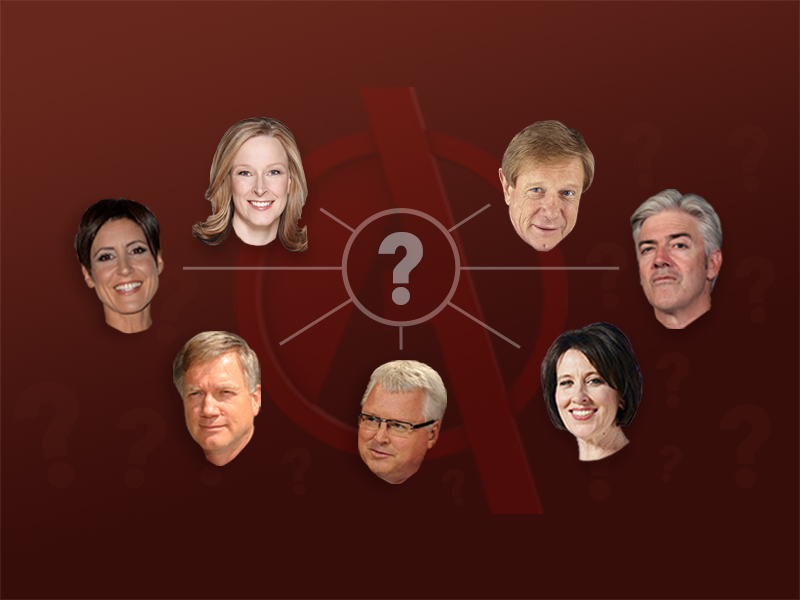 Q&A host Tony Jones has come under some heavy fire in recent weeks after the controversial appearance of a former terror suspect on the ABC’s panel show.

The veteran reporter – also an author and former ABC radio personality – earned rave reviews online. In particular, there was strong praise in an article that called for her to replace Jones, who has made the show what it is today.

“Tony Jones, it’s time to pass the baton,” the author of the Fairfax Media article declared.

“You need to hand the show over, holus-bolus and hands in the air, to Virginia Trioli in 2016. Virginia Trioli, drafted as host while Tony cools his heels in a remote location, showed every sign of having found her natural home.”

Always in command of detail, and the audience, Jones has been a masterful presence at the heart of the show, but Trioli’s appearance got viewers asking – if Jones left, who should take the reins?

Which ABC personality would you like to see host Q&A?

Where you know her from: ABC News Breakfast, Lateline, Sunday Arts, ABC Radio

Why she’d be great: Neil McMahon wrote that while fill-in hosting Q&A, Ms Trioli looked comfortable “flying solo, taking charge, engaging and engaged, warm one minute, warning rabble-rousers to pipe down the next.”

Memorable TV moment: She might class it as a mistake, but when Trioli was caught unawares on camera indicating Banarby Joyce was crazy, it was hilarious.

Where you know him from: Herald Sun opinion pages and blog, The Bolt Report, former Insiders

Why he’d be great: Almost every single thing that Andrew Bolt says or thinks causes astronomic levels of derision.

Memorable TV moment: When Bolt left his long-held slot on Insiders, the highlight video tribute it produced of his climate change scepticism reminded just how great a scene he can drum up.

Where you know him from: Full Frontal, Newstopia, Talkin’ About Your Generation, Mad as Hell

Why he’d be great: Micallef is a former lawyer and incredibly intelligent. Mix that with his quick, hilarious yet obscure wit and on a weekly basis, Q&A could go down any route.

Memorable TV moment: Appearing live on Channel Ten’s ill-fated Breakfast show, Micallef wreaked havoc on the panel and essentially hijacked the program for his own seven minutes of fun.

Why she’d be great: You don’t get any ‘gimme’ questions when Leigh Sales is in front of you. She’d hold any politician’s party-line towing behaviour to watertight account.

Memorable TV moment: Straight after Joe Hockey introduced the 2015 Federal budget to parliament, Sales opened an interview by asking Mr Hockey: “Treasurer, is this what political retreat looks like?”

Where you know her from: Foreign Correspondent, Lateline

Why she’d be great: Her background in finance and economics would help her distill complex financial jargon for audiences. Not to mention the fact she doesn’t mind pouncing on a mistake.

Why he’d be great: Current affairs programming hasn’t been the same since O’Brien left 7.30 in 2010. While others try to mimic his iron-fisted interview style, they pale in comparison.

Memorable TV moment: Within 10 seconds and one question of an interview with Kevin Rudd, O’Brien makes the then-Prime Minister visibly angry.

But the current host is doing just fine …

Where you know him from: Q&A (current host), Lateline

Why he is great: Since 2008 Jones has been great. His dry humour and attention to detail in the hosting chair have seen him convene some of the best political and current affairs debate on Australian television.

Memorable Q&A moment: There have been numerous times where Jones has cut through proceedings when they’re waning. But this sharp introductory burn on Joe Hockey has to be one of his finest lines.

In case you missed the show, here’s a little sample of Trioli in the chair:

And Twitter, as usual, had its say on the matter:

@LaTrioli It was a good show last night. Good table, good discussion. The right amount of schadenfreude watching Bozzie. But I miss ToJo

Q&A: the candidates who could replace Tony Jones