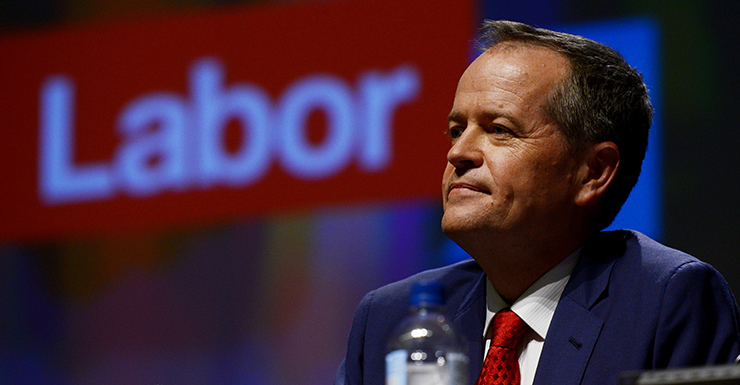 The ALP national conference was billed as a make-or-break event for Bill Shorten, but in reality, there is a far more complex set of circumstances conspiring against the opposition leader.

On the eve of the conference, Mr Shorten raised the leadership stakes by declaring support for a policy which did not rule out the Coalition’s policy of turning back asylum seekers boats.

The stance is opposed by many in the Labor left, but the party’s number crunchers expect that Mr Shorten will get his way by a narrow majority. A vote against the policy would amount to rolling the leader and the party is unlikely to do that. It would be déjà vu all over again.

Mr Shorten’s keynote speech yesterday went down well enough, with only a few scattered boos when he touched on immigration policy.

Underlying this shift on boat turnbacks is the unspoken calculation that Labor will lose some votes to the Greens, but that this shift has almost “maxed out” in the inner-city seats where Labor is most vulnerable.

Shorten made clear that he wants to fight Abbott on matters other than the Prime Minster’s strong suit – some would say his only suit – of security, terrorism and border control.

This boils down to jobs, health, education and energy. On the latter point, Shorten has staked out his commitment to 50 per cent of Australia’s electricity coming from renewable sources by 2030 as a crucial point of difference with Abbott.

Shorten is trying to present himself as a smaller target by insisting that an Emissions Trading Scheme is not a tax, and that a push into renewables will create jobs, and high-technology jobs with a future.

He has a three-word slogan in case Abbott wants to make the next election into a contest about who had the best policy solution for climate change: “Bring. It. On.”

However, the problem for Shorten making this type of Churchillian statement is that it seems to be delivered while he is trying to keep a straight face, before changing gears and making the next wise crack.

He comes across as a skilled debater making a point, rather than as a politician expressing conviction.

Privately, Shorten has had a deep conviction (and a burning ambition) to lead the Labor Party and to be prime minister one day. Early on, he impressed the likes of tough judges like former PM Bob Hawke and ex-ACTU secretary Bill Kelty.

This is not an argument that Shorten works in a personal policy vacuum.

He threw himself into helping create the National Disability Insurance scheme (NDIS), and has announced a series of policy commitments on tax and superannuation which favours middle to low-income earners.

But as a union leader, Shorten was pragmatic and prepared to work co-operatively with employers and business, where possible. His union records are still under the microscope at the Heydon royal commission, but it appears this will lead to criticism rather than any tougher action.

One crucial problem for Shorten is that the Rudd-Gillard wars left the impression with many voters that he is sneaky and willing to shift his support in order to advance his own cause.

Now, it’s true that no Australian political leader made it into the Lodge without having some mongrel in them, when required, along with some ability to charm.

But being sneaky in a Billy McMahon way is a different matter.

Shorten prides himself on being a good mixer – able to converse with shearers and hard-rock miners, while also being at home in boardrooms.

He showed this ability during the Beaconsfield mine rescue in Tasmania, when his national media profile rose overnight through a series of mine-site television interviews. Shorten arrived there after hitching a ride back from New York, on a private jet owned by the late packaging magnate Richard Pratt.

Yet taken too far, this ability can also seem to be like working both sides of the street: of changing your message to suit your audience.

But perhaps the main problem for Shorten is that he is yet to connect with those people who are in between the aluminium smelter and the boardroom. Call them what you will, Middle Australia, or Sir Robert Menzies’ forgotten people – they are worried about Australia’s future and in particular about their standard of living in an uncertain world.

This weekend’s ALP gathering is the first national conference to be held in Melbourne since Gough Whitlam won major reforms in the party ahead of famously winning government in 1972.

In his address, Shorten referred to Whitlam’s famous election speech 43 years ago, to a packed hall in Blacktown in western Sydney on a hot November night. He repeated Whitlam’s words were a choice between “the habits and fears of the past, and the demands and opportunities of the future”.

Shorten still has the habits of his political past, rather than those required of the next Prime Minister of Australia. It may be true that governments lose elections rather than oppositions win them, but Shorten has to bring himself into clearer focus with voters.

That is why the ALP national conference is not the final word on his leadership.