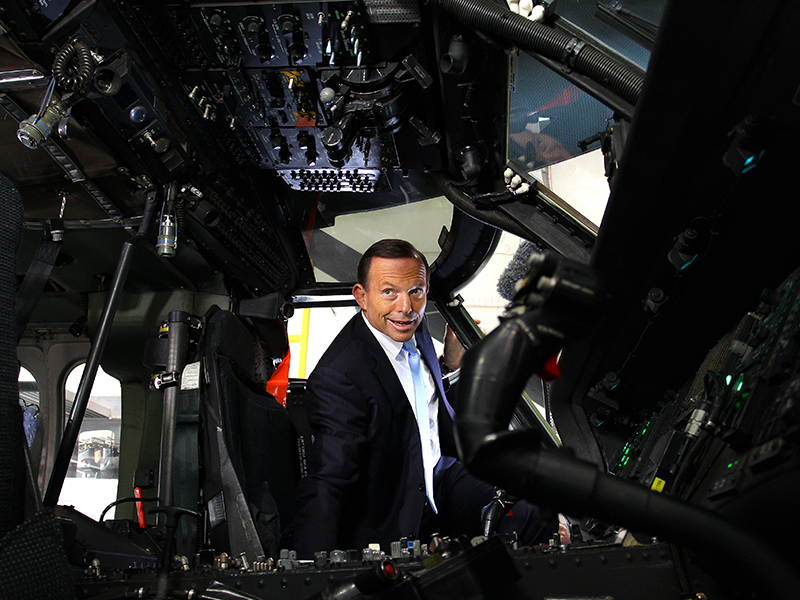 Prime Minister Tony Abbott will have been relieved to see last week’s Choppergate move from the front pages this week, even though the Speaker’s profligacy has not yet faded from voters’ minds.

In these days of shrinking attention spans and the 24/7 news cycle, politicians know they have a bad story on their hands if it lasts more than a few days, and that they’re in serious trouble if it extends to a week.

The PM did his part to distract from the newly P-plated Speaker, hosting a summit of state and territory government leaders to talk about reforming the federation.

This is code for making the states and territories pay entirely for schools and hospitals, and increasing the GST to raise the necessary funds.

The political leaders also found time to consider one of Australia’s most neglected but pressing issues – the scourge of violence being inflicted on women and children in their own homes.

Progress on addressing domestic violence has been very slow to date, so it is necessary to see less nodding and more doing by governments on the crisis in the near future.

Timing is everything in politics, and PM Abbott knew he only had to resist sacking Madam Speaker until this weekend, at which time the media’s lenses and microphones would have shifted to the simmering factional battleground that is the Labor Party.

Send in the clowns

This weekend’s gathering of the Labor faithful at the party’s national conference promises to be the political junkies’ version of a three-ring circus. The left faction will battle it out with the right for policy supremacy on iconic issues such as climate action, asylum seekers and gay marriage.

And the unions will make a claim for an even greater role in party decisions including the pre-selection of candidates, because what the Labor Party apparently needs is even more MPs with a union background.

Both Mr Abbott and Mr Shorten had “look at me” moments during the week, granting interviews to the ABC’s 7.30 over consecutive nights in an attempt to reframe the matters that were causing them grief.

While Mr Abbott stuck excruciatingly to his “stop the boats, axe the tax” mantra, Mr Shorten dropped a bombshell, announcing Labor would adopt the Government’s boat turn-back policy. In doing so, the Labor leader pre-empted a vote on the issue at this weekend’s conference, which may provoke a heated response from the Labor left and a boost support for the Greens.

Most memorable line of the week

Given that Mr Shorten has been instrumental in Labor being seen to cosy up to the Coalition Government on boat turn-backs and national security, the Labor leader hit peak irony just seconds into his opening address to the national conference.

“Never has the contrast between us and our opponents been more clear,” Mr Shorten thundered. Perhaps he was referring to the Greens as Labor’s opponents, and not the Coalition.

Further opinion poll evidence emerged this week that both Mr Abbott and Mr Shorten are on the nose with voters. Only 13 per cent of the people surveyed preferred Mr Abbott as Liberal leader, while only 12 per cent believed Mr Shorten should lead the Labor team.

This is perhaps less surprising for the Opposition Leader given his recent appearance at the union royal commission.

However the PM has been playing his strongest card in recent weeks, namely national security, but it hasn’t delivered the expected dividends – either in an improvement in Mr Abbott’s personal approval rating or enough voter support for the Government to win the next election.

We saw what Labor did there

One attempt by Labor to improve its leader’s standing with voters is the launch this week of the Labor Herald, the party’s own online newspaper. According to its blurb, the site is an “openly biased news service” that publishes “news, culture and politics commentary about the environment, economy, families and people, education, health and politics” from the ALP’s perspective.

The initiative has been ridiculed and lambasted for being everything from lame and corny to shamelessly partisan. But that’s the point. It’s a way of getting Labor news and information to the party’ supporters so that they can share it in their own networks. In short, the Labor Herald is PR101 in the 21st century.