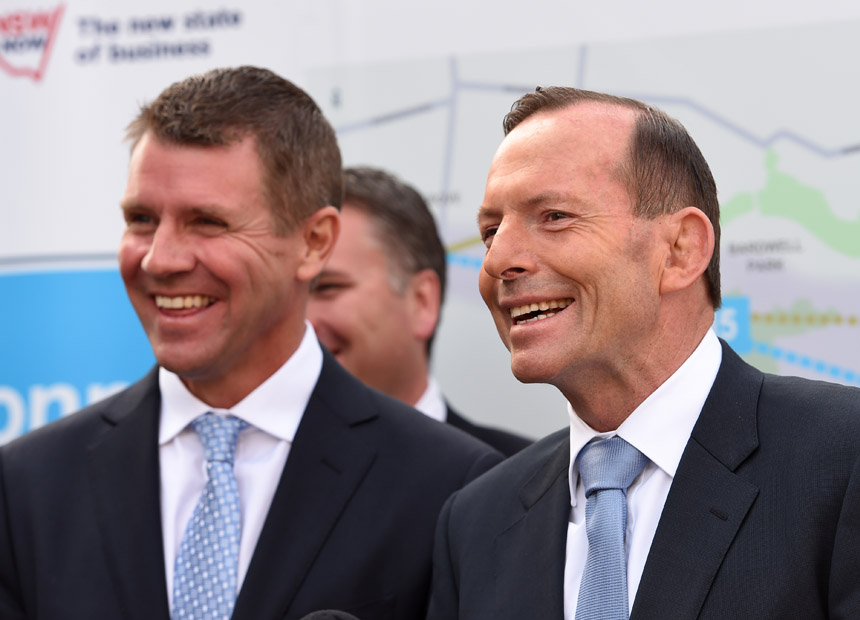 In a military barracks originally built to defend the colony of New South Wales, Australia’s leaders are today sitting down to discuss the federation’s weaknesses.

The leaders’ retreat at Sydney’s Victoria Barracks has been organised so Prime Minister Tony Abbott and state and territory leaders can discuss which level of government should pay for what, and how.

Its focus will be healthcare, where New South Wales Premier Mike Baird has done some maths to show that there simply is not enough money to go around, regardless of whether the Federal Government had cut billions from its future contributions or not.

The conclusion that they cannot pay for the services they are expected to deliver has prompted a willingness from most leaders to at least entertain the suggestion Mr Baird will put forward — that the GST rise from 10 to 15 per cent, with poorer households (those earning less than $100,000 a year) compensated and the remainder raised going to health care.

The mood as the leaders entered the retreat this morning seemed positive, with Queensland Premier Annastacia Palaszczuk saying the meeting was an example of “coooperative federalism”, and Western Australia’s Colin Barnett declaring “the mood is good”.

The language from people like Ms Palaszczuk and Victoria’s Daniel Andrews, who both want to lift the Medicare levy to pay for health spending, has been conciliatory.

There does seem a consensus that Mr Baird has explained a simple truth: none of them can afford to pay for the health system voters currently have and expect to keep in the future.

NT Chief Minister Adam Giles told the ABC he supported the opportunity to discuss tax reform to benefit the health and education sectors.

“We know that in future years our health bills are going to be significant, particularly with looming renal and dialysis issues,” he said.

Business groups and the welfare lobby are also willing to agree that something needs to be done, if not exactly what.

Despite all this, significant hurdles remain.

The basis of the NSW Premier’s case puts Treasurer Joe Hockey in a bind. Mr Baird argues that states and territories did not have enough money to pay for schools and hospitals even before the controversial budget decision to strip $80 billion from the states in future health and education funding over the next decade.

Increasing the GST from 10 to 15 per cent, he argues, will help overcome this. But this is at odds with both Mr Hockey and the Prime Minister.

Neither of these things can happen if the reluctant states are persuaded to sign up on the basis that money raised will be spent on health care.

Both Queensland and Victoria are citing their continued commitment to pre-election promises to oppose any GST increase.

With the renewed appetite for political leaders of all colours to come up with ways to address the funding problem, Mr Andrews is instead proposing the increase to the Medicare levy, which Ms Palaszczuk has said she was having departmental staff examine closely.

Their federal Labor counterparts remain against a GST increase on the basis that hiking a consumption tax affects poor people more.

Because they spend a greater proportion of their income relative to wealthy people, they therefore pay proportionally more tax.

But the new tone suggests no longer is that objection absolute.

South Australian Premier Jay Weatherill has been the most outspoken, willing to acknowledge yesterday he would “seriously consider” the Baird proposal if compensation could offset the cost to low income earners.

Pressed on where that left him in relation to his party’s position, Mr Weatherill replied that he had a state to govern and “didn’t have the luxury of opposition for opposition’s sake”.

Mr Giles, a Country Liberal, said he was also prepared to discuss the GST proposal brought forward by Mr Baird.

“I’m quite happy to have a discussion about what the 15 per cent GST might be, particularly if it means removing stamp duties on insurances, commercial, households [and] looks at changing income tax thresholds,” he said.

“But we need to balance it right and also make sure we’re not too harsh on people with lower incomes, we need to be able to provide a model of compensation.

“What we want for the NT is a system where we’re not taxed any more.”

Western Australia’s Liberal Premier Colin Barnett is in the “willing to consider” camp, but that is only if a deal were to include changing the GST distribution formula, which others, in particular Tasmania, bitterly oppose.

The Howard government’s deal on GST arrangements did put in legislation a requirement that all states and territories agree to any change, but that is Commonwealth legislation and constitutional lawyers have been quick to point out that means the Commonwealth can just so easily change it.

While there might be a growing recognition of a need to do something, there is little pressure on the leaders gathered at today’s retreat to secure an immediate deal.

Its official purpose is to provide input to the Government’s federation white paper.

It is also likely that were any deal to be agreed, it would go to the next election, consistent with the Government’s promise that it would put any proposed change to voters.