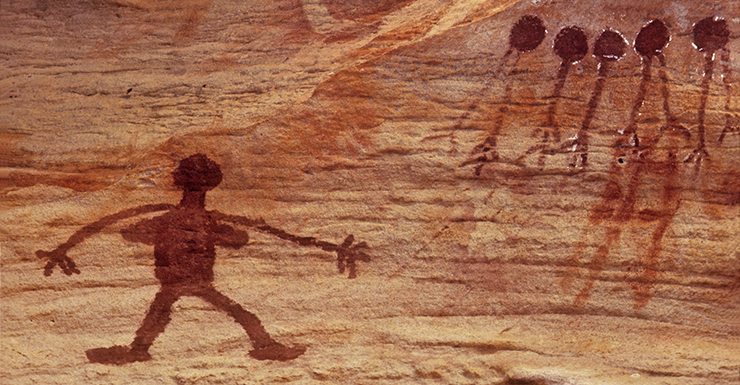 A stunning discovery by US and Brazilian geneticists has provided definitive evidence for a controversial theory that the Siberian ancestors of modern Native Americans were not the first people to colonise the Americas.

A team of US and Brazilian geneticists, led by Dr David Reich, of Harvard Medical School’s Department of Genetics, has shown that members of the Surui, Karitiana and Xavante peoples of Brazil’s Amazonia region, carry distinctive DNA sequences that identify them as the descendants of an earlier wave of colonists known as the Australoids.

These people, said to have left Africa 50,000 years ago, are related to Australia’s Aborigines, the Onge people of India’s Andaman Islands, and Papua New Guineans.

Dr Reich and his colleagues have also identified Australoid genetic motifs in the indigenous Mixe people of the eastern Highlands of Mexico’s Oaxaca state.

They are not suggesting that the Amazonian and Oaxaca are the direct descendants of Australoids; rather, they suggest that later Amerindians colonists interbred with the descendants of an earlier wave Australoid colonists they have dubbed “Population Y”.

But the US-Brazilian team admits it cannot yet determine when Population Y colonised the Americas; they say more detailed analyses of ancient human remains from across the Americas may resolve when they arrived, and when they interbred with the ancestors of the Amerindian peoples of Mesoamerica and South America.

Until recently, most genetic evidence from studies of modern Native Americans, and ancient skeletal remains, indicated that North and South American peoples were descendants of a single founding population of ancient Siberians, related to the latter-day Chukchi peoples of eastern Siberia.

But linguistic evidence, and studies of the morphology of several ancient skulls from both North and South America, offered hints that the colonisation of the Americas was a more complex process, involving at least two, possibly three waves of colonisation.

One of the most distinctive ancient skulls from the Americas was discovered by a French-Brazilian archaeological team in Vermelho Cave, near Belo Horizonte in south-eastern Brazil in 1973.

The skull, that of a young woman dubbed “Luzia”, yielded a radiocarbon age of 10,030 years. Its narrow, oval cranium with a projecting face and lower chin, resembled the skulls of modern Australoid peoples like Australia’s Aborigines, Melanesians, and the various South-east Asian peoples.

Findings a shock to established thinking – but there were signs

For decades, the North American archaeological establishment clung to its “Clovis-first” dogma – it simply rejected all evidence supporting claims that an earlier wave of people might have colonised the Americas thousands of years before Clovis hunter-gatherers left their exquisitely flaked flint arrowheads and spearpoints scattered across North America around 13,000 years ago.

The Siberian ancestors of the Clovis people used the frozen Bering Strait to island-hop between Siberia and Alaska towards the end of the last glacial period around 13,500 years ago.

In 1986, Brazilian archaeologist Niede Guidon reported she had discovered knapped (the shaping of stone through the process of lithic reduction) stone tools – knives, scrapers and sharp flakes at Pedra Furada in north-eastern Brazil.

She had found the stone tools during excavations of a number of rock shelters in a 1973 expedition. Charcoal recovered from the deepest levels of the excavated rock shelters yielded radiocarbon dates between 48,000 and 32,000 years, but in a subsequent analysis, US archaeologist Tom Dillehay suggested the charcoal was deposited by natural wildfires in the region.

Dr Dillehay himself had experienced the scorn of the North American Establishment after claiming a radiocarbon date of 14,500 years from his excavation of an ancient, pre-Clovis settlement at Monte Verde, on the Chilean coast.

One of the most promising places to look for more definitive evidence linking an ancient Australoids population in the Americas with modern Australoid populations in south-east Asia and Australia may be in southernmost South America – with the near-extinct indigenous peoples of Tierra del Fuego.

These people have long been noted as distinctively different to most Amerindians, both in appearance and in their culture.

How Fred Hollows and Charles Darwin contributed to the theory

In 1990, as a science writer for a metropolitan newspaper, your correspondent interviewed legendary ophthalmologist and eye surgeon Professor Fred Hollows at a Menzies Health Research conference at Hobart’s Wrest Point Casino.

Prof Hollows told a fascinating tale about the visual acuity of Australia’s Aborigines – he was renowned for his work treating eye problems in Aboriginal Australia.

He claimed an Aboriginal Australian with good eye health can read one line further down a standard eye chart than the average Australian of European descent.

With both eyes open, Aboriginal Australians can read two lines further down an eye chart – a faculty, he said, that was clearly not due to any inherent superiority of the lens of the eye, but due to some fundamental difference in the way the visual cortex, in the hindmost part of the brain, integrates data from both eyes to produce binocular vision.

There were already suggestions at the time from some scientists that the Fuegians were of Australoid, rather than Amerindian ancestry.

Several years later, I was reading Charles Darwin’s famous The Voyage of the Beagle, in which he describes his observations of the Tierra del Fuegians.

I was struck by his description of their visual acuity:

“Their sight was remarkably acute; it is well known that sailors, from long practice, can see a distant object much better than a landsman,” he wrote.

“But both York and Jemmy (two of Darwin’s Fuegian acquaintainces) were much superior to any sailor on board; several times they have declared what some distance object has been, and though doubted by everyone, they have proved right when it was examined with a telescope”.

Darwin also describes the sounds of the Fuegian language: “The language of these people, according to our notions, scarcely deserves to be called articulate. Captain Cook has compared it to a man clearing his throat, but certainly no European ever cleared his throat with so many hoarse, guttural or clicking sounds.”

It seems the Fuegians spoke a click language – and linguistic and genetic evidences suggests the earliest modern humans spoke click languages similar to the Khoisan peoples of southern and eastern Africa.

Khoisan languages, like that spoken by the Kung bushmen of Nambia, are liberally sprinkled with hollow, clicking sounds approximating the hard “k” fricative of English, but produced further back here the soft palate joins the throat.

The Fuegian click is softer, but still distinctive – an example can be found in a Spanish documentary on Cristina Calderon, the last living native speaker of Yagan, which is thought to the language spoken by the Fuegians Darwin described.

Watch this clip for historic footage of the Fuegian people: