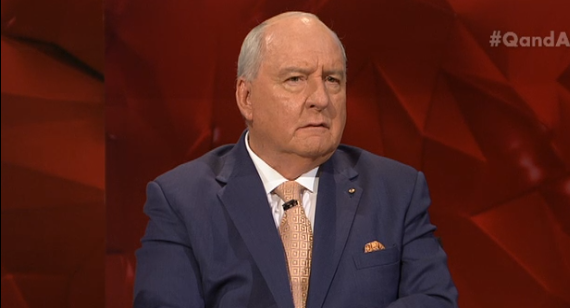 Controversial radio host Alan Jones has given Australia’s politicians a whack over excess spending in the wake of Speaker Bronwyn Bishop’s use of a taxpayer-funded helicopter to fly to a party fundraiser.

Describing Ms Bishop’s 80-minute trip from Melbourne to Geelong – which cost taxpayers $5227 – as “bloody ridiculous”, Mr Jones labelled the MP expenses system as a “gravy train that is basically out of control”.

“There is general concern about the level of waste in relation to parliamentary allowances. The public feel they have no check in this whatsoever,” Jones said in a typically exuberant performance on the ABC’s Q&A program on Monday night.

“The Speaker is the third-most senior administrative person in the country. The Governor-General is the most important and the Prime Minister the second. They have a chartered allowance.

“Now I know (Labor MP) Tony Burke was quite critical of this today. And I was looking at figures today and at Tony Burke’s charter expenditure.

“A total expenditure between 2008 and 2013 of $316,000. Now in many instances they weren’t accounted for. I think the public are really tired of (them) dipping into taxpayers’ money and saying we can all be treated like potentates. The notion for example of going from Tullamarine to Geelong in a helicopter is just bloody ridiculous.”

Fellow panellist, federal Labor frontbencher Mark Butler, said he would welcome a review of the entitlements rules for politicians.

“The one silver lining that comes out of these controversies – that happen every several years or so – is that there’s generally a good review.

“I think all of us always welcome a review when there’s some sort of issue that causes the public to focus on these things because what we want, as I said is community confidence in these issues.”

Independent Senator Jacqui Lambie believes the Labor Party has no choice but to call a no-confidence vote in Ms Bishop and that all party donations should be put under the microscope.

“The whole problem is there is a lack of absolute clarity of what is within entitlement, especially if you’re within a regional electorate that stretches hundreds of kilometres and what’s not in entitlement,” he said.

“It is areas of grey they need clarifying, they can be clarified, and they need to be clarified because I tell you what, every single member of parliament and senate on both sides are going to be besmirched by this affair.

“With regard to Bronwyn Bishop, now on probation, she is a busy person, she supports many good causes…she travels a lot. What she did was unacceptable, what she did was a massive error of judgment. She must pay it back. This is still an ongoing investigation and I will wait and see the outcome.”

Prime Minister Tony Abbott on Sunday said Mrs Bishop was on “probation” but that she continues to enjoy his confidence.

“I can really understand why people are unhappy about this,” Mr Abbott said.

“Frankly, I’m unhappy about it as well.”

“We will all learn the lesson, and the fundamental lesson is we are expected to be focused absolutely on the people of Australia and their betterment,” he said.

Opposition Leader Bill Shorten has demanded Mrs Bishop stand aside while her use of entitlements is investigated by the Finance Department.