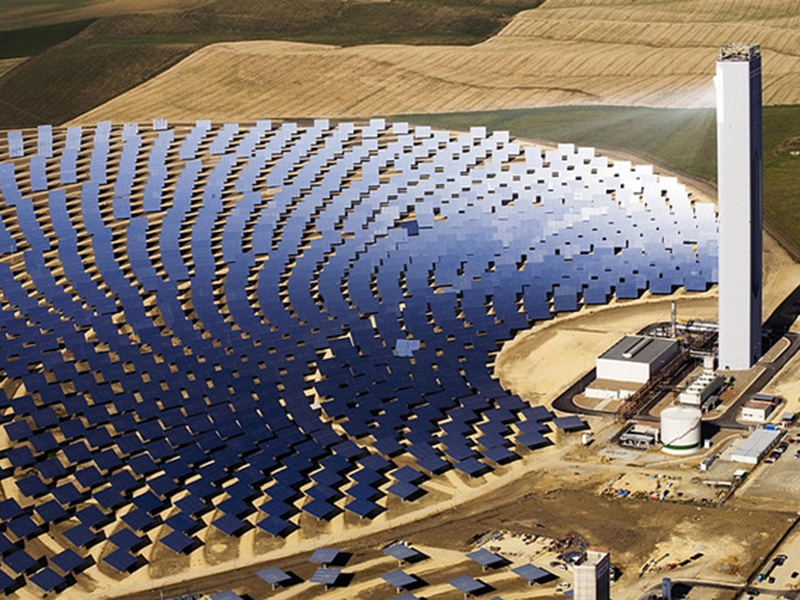 Thousands of sun-tracking glass mirrors encircled around a tall, glimmering obelisk in the desert – it sounds like something out of a sci-fi movie, but solar thermal towers are being touted as the next big thing in renewable energy.

With this week seeing the Australian Renewable Energy Agency (ARENA) set up a dedicated big solar program and the federal government controversially banning the Clean Energy Finance Corporation (CEFC) from investing in wind farms or rooftop solar projects, these massive sun-soaking skyscrapers have suddenly shot to the front of the queue for funding.

Environment Minister Greg Hunt and Finance Minister Mathias Cormann have both lauded the benefits of “big solar” – which also includes conventional large-scale solar PV plants – but those within the solar thermal industry have mixed emotions about the government’s support.

Dr Keith Lovegrove, head of solar thermal at renewable energy consulting company ITPower, told The New Daily that while he saw contradictions in the government’s approach to renewable energy, it ought to be given “the benefit of doubt” over its enthusiasm for super-sized solar projects.

“Solar thermal is globally growing at 30 per cent per annum – the same rate as PV – and accounts for a bit under 10 per cent of the world’s solar energy,” he said.

“It would be rather good if Australia got on board as well.”

There are a number of different types of solar thermal towers, but the type gaining the most momentum in Australia produces power by reflecting the sun’s energy off mirrors onto a central structure containing molten salt, which is heated to temperatures of over 500 degrees Celsius and pumped into steam generators.

Dozens of towers have been completed or are under development around the world, including the US, Spain, China and Turkey.

The trouble is, these elaborate towers are very, very expensive, and when assessed on a dollar-per-kilowatt basis they can’t compete with regular solar or wind power.

Dr Lovegrove argued, however, that the technology is still at the top of its cost-development curve and is getting cheaper by the year.

He also said that solar thermal could provide something other forms of renewable energy could not offer – a guaranteed energy supply.

The molten salts heated up by the sun can retain the heat even when the sun stops shining, as opposed to conventional solar or even wind farms that require the wind to be blowing.

“Cheaper variable renewable options are great, but solar thermal is an important part of the future energy mix,” he said.

RePower Port Augusta is campaigning for solar thermal to replace the South Australian city’s ageing coal-fired power stations, which are set to be mothballed by 2018 at the latest.

Campaign manager Daniel Spencer said the owner of the coal plants, Alinta Energy, was conducting a feasibility study into the idea but after initial projections indicated a $577 million price tag for a 50 megawatt plant, the early signs were the company would not go beyond that.

Spanish firm Abengoa, winner of a $450,000 ARENA grant for a study into a 20 megawatt solar tower power project at Perenjori in WA, has also shown interest in Port Augusta, as has Solar Reserve.

After campaigning heavily against the cut to the RET, Mr Spencer was cautious in welcoming the federal government’s professed support for the sector.

“We do support government investing in big solar, but we want to make sure other renewables aren’t shafted in the process,” he said.

“We’ll follow up the opportunity and try to make something happen in Port Augusta, but we’re sceptical – there is certainly a lack of trust.”

Solar thermal: the dark horse in the renewable energy race