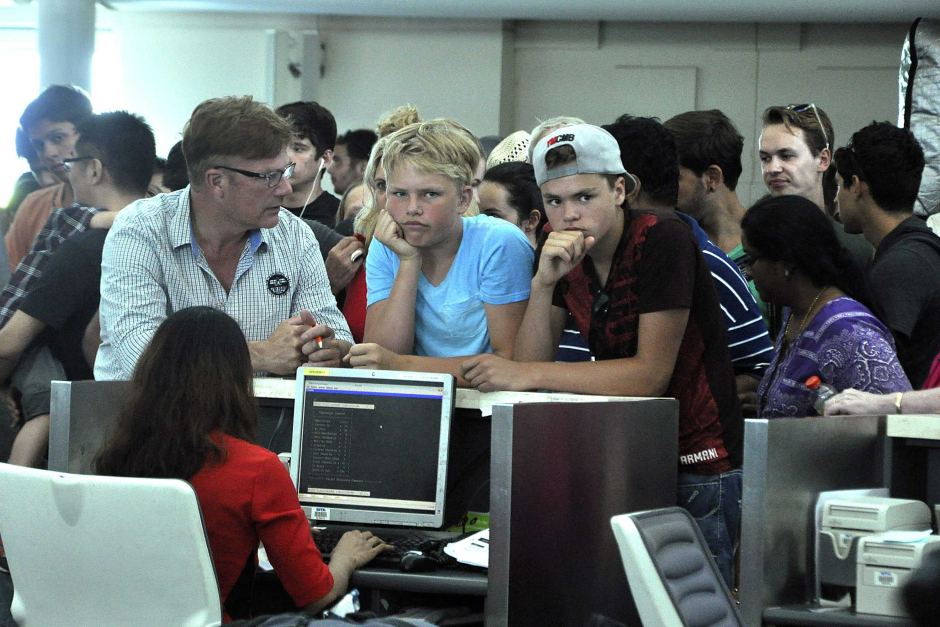 Thousands of Australians are returning home from Bali over two days as airlines race to beat a change in weather conditions.

Qantas is planning two special relief flights to supplement additional services by its Jetstar subsidiary in an effort to get remaining travellers home from the holiday destination where flights have been delayed by volcanic ash clouds.

Jetstar Australia and New Zealand chief executive officer David Hall said the Qantas flights would bring the number of flights to Australia on Wednesday to 19.

“That will be 13 services more than we normally have back into Australia,” Mr Hall said.

“By tomorrow, weather conditions permitting, we will have brought back 7000 customers, which will have cleared the majority of the backlog.”

Virgin Australia has flown 2000 passengers home in the past day but spokeswoman Danielle Keighery said there are about 4000 customers still held up in Bali.

“It will take a few days to clear the backlog if we have favourable conditions,” Ms Keighery said.

Flights to and from Bali have been interrupted since the Indonesian volcano Mt Raung erupted on July 2, emitting clouds of ash with the potential to block jet engines.

Denpasar airport has reopened intermittently but changes in wind direction have brought ash back towards critical airspace and kept aircraft grounded.

Ms Keighery said Virgin hoped to fly out another 2000 travellers on Wednesday.

“It does depend on the weather and I keep saying that because things can change very, very quickly,” she said.

“It’s very unpredictable and the next week or so the ash will continue there. We continue to monitor,” he said.

Mr Hall responded to criticism by customers that Jetstar had not kept them informed of flight changes by saying it had improved its efforts.

“It’s fair to say earlier on that we probably weren’t perfect in that regard,” Mr Hall said.

He said the airline had increased its communication with customers over the past day and now had more staff in Bali.

Virgin Australia has suggested that anyone with a booked Bali holiday reconsider their travel plans and it is offering package alternatives for other destinations.

Mr Hall said people faced with added accommodation costs after being stranded needed to talk to their insurers.

“We encourage people to liaise with their travel insurers. In these sorts of circumstances, these are outside the airline’s control,” he said.

The Insurance Council of Australia says not all travellers will be covered for unforeseen costs even if they have travel insurance because of the many different conditions and exclusions in their policies.

It is unclear how many Australian holidaymakers are stranded in Bali.

More than 77,000 Australians travelled to Bali in May, according to official Indonesian statistics.