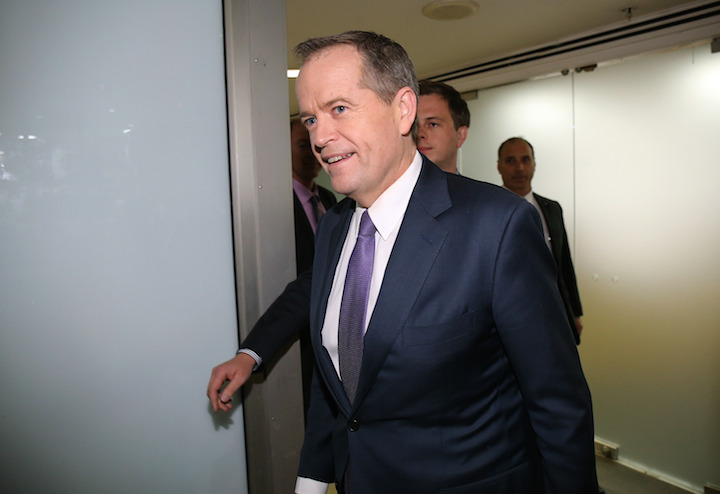 A Roy Morgan poll published on Monday shows a 2.5 per cent drop for the Labor Party, down to 51 per cent, and a 2.5 per cent rise for the Liberal-National Party to 49 per cent. The poll indicates that if a federal election were held now, it would be too close to call.

The poll suggested that the drop in ALP support is linked to the Opposition Leader’s appearance at the commission in Canberra.

Pollster Gary Morgan said the publicity about Mr Shorten’s conduct and credibility while at the AWU “has no doubt had a direct impact on the drop in ALP support”.

“This is despite the significant media coverage of Zaky Mallah’s controversial Q&A appearance and Prime Minister Tony Abbott’s ban on Coalition frontbenchers appearing on Q&A.”

Mr Shorten spent two days in the witness box at the Royal Commission into Trade Union Governance and Corruption, where he denied knowingly overseeing false invoices and approving enterprise agreements which disadvantaged low-paid workers during his time working for the Australian Workers Union between 1998 and 2006.

One such instance was a 2004 workplace agreement with cleaning company Cleanevent that sanctioned below-award payments and poor conditions for employees.

While the commission failed to prove Mr Shorten’s knowledge of the dealings, it did reveal a previously-undeclared $43,000 campaign donation from labour hire company Unibilt in 2007. Giving evidence last week, Mr Shorten admitted that the donation had only been declared in recent days.

The Australia-wide poll was conducted over the past two weekends and also gives the ALP has a two-party-preferred vote in three states (Tasmania, Victoria and South Australia), while Western Australia and New South Wales prefer the L-NP, and Queensland is divided evenly.

Government confidence has dropped, with 45.5 per cent of respondents believing “Australia is heading in the wrong direction.”