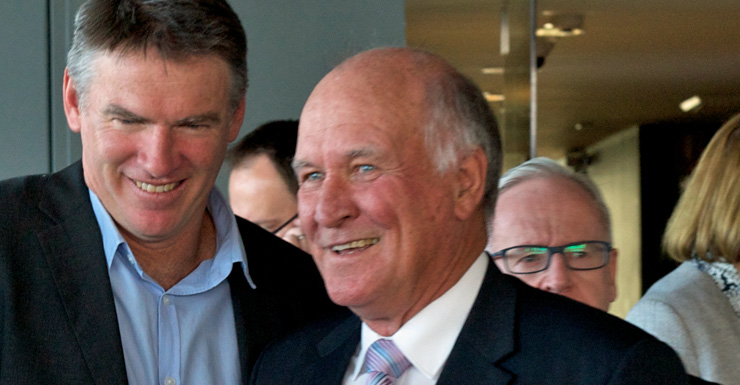 Rob Oakeshott and Windsor were pivotal to the Gillard govt.. Photo:AAP

Tony Windsor, the key Independent MP who helped Labor retain government in 2010, says his anger at a coal mine approval could spur a political comeback.

“I am considering it [but] haven’t made a firm decision one way or the other,” he said.

The former New England MP said he was upset by the Government’s decision to conditionally approve the Shenhua Watermark mine on the Liverpool Plains, and it was a strong reason to return.

“The approval of the Shenhua mine yesterday was definitely a tick in the positive box in a sense that I’d reconsider,” he said.

The former Nationals MP, who played a role in changing the rules around water and mine approvals, said the mine threatens the agricultural region’s water resources.

“They’re prepared to risk that because of shonky processes in the past,” he said.

“Here we have this magnificent piece of land, underlain with the biggest groundwater system in the Murray-Darling and they’re going to put that at risk because of the shonky arrangement that was put in place.”

Mr Joyce is the Agriculture Minister and holds the seat by a 14 per cent margin. Mr Windsor said he had not analysed his chances of winning back the seat.

“I haven’t gone into the dynamics of numbers, I tend to focus on the big issues,” he said.

“If those issues that I’m particularly interested in are the ones that people in the area are interested in, maybe they’d consider that.”