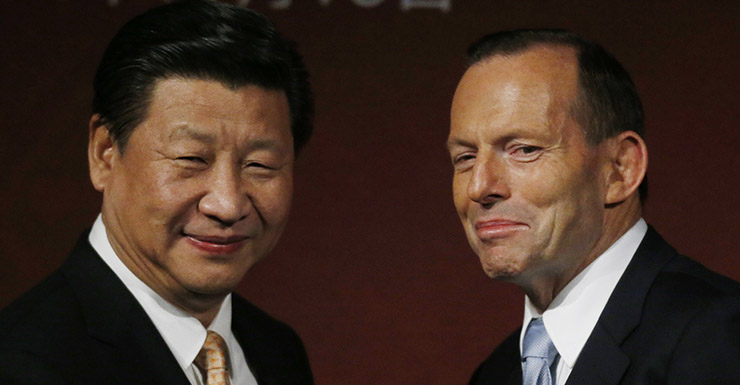 The China free trade agreement is another example of how all politics is local.

The Abbott government has been spruiking the importance of the “ChAFTA” for the Australian economy without gaining much interest from voters, apart from a kind of instinctive worry.

But then it emerged that a “side letter” to the FTA meant that Australia would remove the requirement for mandatory skills assessment for a range of Chinese tradies, including electricians.

This is no longer hypothetical geopolitics. It’s on home turf, even tabloid territory. Do Aussie homeowners and businesses want a Chinese sparkie up in the roof of their home, or their shop/factory/mine site, working with live wires?

To be clear, the aim of this column is not to encourage xenophobia – there’s enough of that polluting our public debate already.

But Australian authorities previously thought it best to test the skills of tradespeople from some countries, including China. Now, they have changed that view without explanation.

The Abbott government should explain the change, given that it established a royal commission into the former Labor government’s home insulation scheme, in which four young men died in 2009 and 2010.

My main point is that the federal parliament and Australian voters have a right to know what is being negotiated in free trade agreements before they are signed.

In the China FTA, the “side letter” on skills assessment and training only surfaced after the deal was signed. The treaty documents are available here.

A broader propaganda war is now underway between the union movement and the government over the FTA allowing new Chinese-owned projects worth more than $150 million to bring in their own workers under temporary visa programs.

This concession appears to be broad – covering new infrastructure in food and agribusiness; resources and energy; transport; telecommunications; power supply and generation; environment; or tourism.

One part of the FTA says that Chinese project developers will be able to strike an Investment Facilitation Arrangement (IFA) with the government and “there will be no requirement for labour market testing to enter into an IFA”.

That is, there will be no requirement for the project to test whether there are local workers to do the work.

But another part of the China FTA says the labour agreement will set out the number, occupations and terms and conditions under which temporary skilled workers can be nominated, including any “requirements for labour market testing”.

Unions are pushing fears about an influx of temporary Chinese workers under the FTA, prompting allegations of racism from Coalition MPs.

So perhaps Trade Minister Andrew Robb can defuse the row by stating whether labour market testing will be needed?

In the meantime, a fact check by The Conversation website has concluded that, overall, the union claim that the China FTA could lock out Australian workers does stack up.

But could these disputes have been lessened if the process was more transparent from the start?

The process needs to change

The Senate’s committee on foreign affairs, defence and trade last week tabled a report which argued that Australia’s treaty-making process needed to be overhauled.

The report concluded that the Commonwealth government’s treaty-making process was unnecessarily secretive, ignores the public and has a poor level of independent analysis before treaties are signed.

It recommended that trade agreements be subject to an independent cost-benefit analysis prepared at the start of negotiations.

Furthermore, it argued that a model clause be developed to deal with complex issues such as investor-state dispute settlement, intellectual property and copyright which are being negotiated in secret for the Transpacific Pacific Partnership, or TPP.

“All treaties, including complex free-trade agreements, are only presented to the parliament and subject to scrutiny after they are signed by the government,” the report says.

“That parliament is faced with an all-or-nothing choice when considering legislation to bring an agreement into force prevents it from pursuing a key scrutiny and accountability responsibility.

“It is no longer satisfactory for parliamentarians and other stakeholders to be kept in the dark during negotiations when Australia’s trading partners, including their industry stakeholders, have access under long-established and sensible arrangements.”

The majority report argued that complex free trade agreements like those with Korea, Japan and China and the proposed TPP were “encroaching on the Australian domestic sphere without an adequate level of stakeholder engagement, public consultation, parliamentary oversight and executive accountability”.

The government committee members reckon the treaty process is working well, as does the Department of Foreign Affairs and Trade.

But Labor, the Greens and crossbench Senators hold sway on that committee.

Another parliamentary committee, the Joint Standing Committee On Treaties (JSCOT), will examine the China FTA, but the government has the numbers there and the outcome will be positive.

DFAT has a “Yes, Minister” argument on all this, noting that treaty-making is the formal responsibility of the executive rather than the parliament, under the Australian Constitution.

The department reckons it is parliament that decides whether to pass the legislation needed to bring treaties into law, which is technically correct but more of a formality in practice.

Yet it’s not only protectionists and lefties who question the worth of FTAs.

The Productivity Commission is comprised of free-market purists, but it argues there is a “growing and compelling case” for the negotiated text of an agreement to be comprehensively analysed before signing.

Finally, many of the gains in the China FTA’s National Interest Assessment are hard to quantify, even though one can see broad gains for many Australian farm exports.

The Financial Review‘s China correspondent, Angus Grigg, has argued that the FTA is already “looking dated“, as other countries are given similar access to that granted to Australia under the treaty, including in service industries such as telecommunication and financial services.

In short, don’t believe the hype about the China FTA. It deserves closer scrutiny, even though it is now a done deal.

What you don’t know about the China FTA