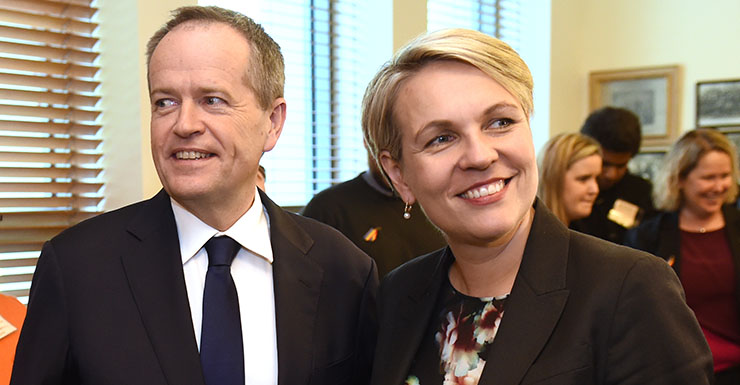 Deputy Labor leader Tanya Plibersek is standing by Bill Shorten after the opposition leader admitted he lied about whether he had met with Kevin Rudd during the leadership saga of 2013.

“That’s enough … you should be holding the prime minister to account,” she told reporters in Canberra on Thursday as they quizzed her about the admission and whether Australians could still trust the Labor leader.

“Why don’t you ask Tony Abbott if he ever lied about saying no cuts to health, no cuts to education, no changes to pensions, no cuts to the ABC.”

Ms Plibersek earlier told the ABC that Mr Shorten was talking about “ancient history” when he regretted the answer he gave on talkback radio in June 2013, days before he switched sides to restore Mr Rudd to the leadership.

At the time he told 3AW radio host Neil Mitchell that there was no question Julia Gillard would remain leader, that he was not reviewing his support for her and had not been asked to do so.

Asked about the exchange on Wednesday, Mr Shorten said it was not his job to be the “curator of the museum of Labor” and the leadership changes were now history.

Labor frontbencher David Feeney said no one should have expected a cabinet minister to reveal to the media about the nature of any contests going on inside the government.

“I think those were moments which were typical of the leadership challenges going on at the time,” he told reporters in Canberra.

According to Mr Mitchell, Mr Shorten called him during the 11am news on Tuesday to apologise for his conduct.

Late on Tuesday night, Mr Shorten was interviewed at Parliament House in Canberra.

A journalist asked him: “Have you lied, Mr Shorten?”

“I do regret my remarks, unequivocally, I regret them, and I’ve conveyed that,” Mr Shorten responded.

“I was very conscious of not causing further problems for Labor.”

He said it was a “tough time” for Labor in 2013 and he was trying not to “make life harder” for the party.