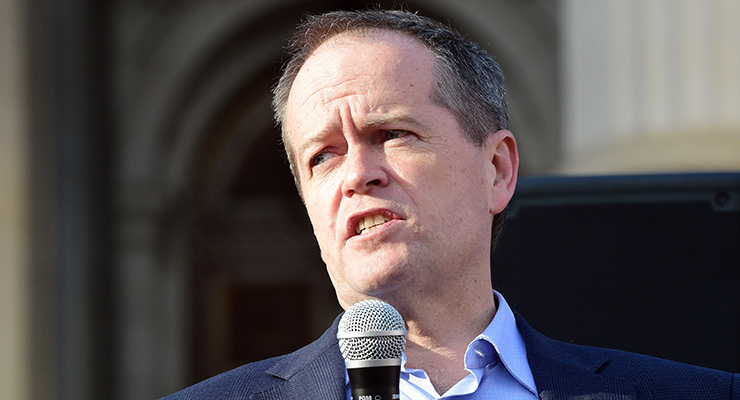 Bill Shorten can be criticised for some things, but not for the treatment of workers covered by the 2005 agreement for Melbourne’s $2.5 billion EastLink road project.

The workers were well paid, with labourers on base pay of $150,000 and tradespeople well above that. The project was seen by employers and investors as an island in Victoria’s often stormy construction industry.

Yet there were strong undercurrents. Shorten was Victorian and national secretary of the right-wing Australian Workers Union, which is a long-time rival of the left-wing Construction Forestry Mining and Energy Union.

• Grandmother’s plea to PM about terror kids
• Study reveals the most muscly people on earth
• Hit unsend: how we can now take back emails

The CFMEU disliked the EastLink agreement because it did not apply the template terms and conditions that it applies to commercial construction in Victoria, a so-called pattern agreement which the union pursues on high-rise CBD projects.

The EastLink agreement retained 26 rostered days off per year, but it provided for 13 RDOs to be fixed and for 13 days to be “floating” to be taken without slowing down work on the project.

The civil construction deal inked by Shorten had other differences from the CFMEU template, including a more flexible policy dealing with bad weather.

But construction insiders say the most important part of the agreement was that it did not require a union-endorsed deal struck with the head contractor to be mirrored in all sub-contractors working on the project.

The CFMEU and its predecessor unions try to be price-setters – through applying industrial pressure in a time-precious industry – and are regularly before the courts for overstepping the line.

In contrast, the AWU is a price-taker and has been for many years. On the EastLink project, the head contractor, Thiess John Holland, preferred to get a deal with the AWU because this helped keep the more militant CFMEU at bay.

“It was simply pragmatic deal-making,” said one construction executive.

This was often the case with civil construction projects. It should be noted that the arrangements at EastLink were later broadened to include the CFMEU because they represented many of the members who were needed to do the work.

However, the Eastlink agreement is only part of the dealings that Shorten will be quizzed over when he appears before the royal commission into trade union governance and corruption on July 8.

The commission is trawling through the AWU’s membership records and accounts to find details of payments by employers to the union, which appear to have started before Shorten took leadership roles at the union and continued after he left.

The payments include six-figure totals received from Thiess John Holland and the global chemical company, Huntsman, which were declared to the Australian Electoral Commission.

In a confident performance on the ABC’s Insiders program on Sunday, Shorten argued the AWU had been attacked because Thiess John Holland “paid for training of our delegates, paid for health and safety. You know, this is not unusual in the construction industry”.

“The real issue here is that somehow a company working with a union in the best interests of employees and the project is somehow suspicious,” he said. “There’s almost a reverse class war analysis going on because I’m a modern bloke, trying to get cooperation not confrontation, you know, people are saying that is the wrong way to go.”

Shorten argued that he was proud to have been a moderate, pragmatic union leader.

He conceded it was “entirely possible” that some companies paid union dues on behalf of their employees, even though this was not the AWU’s preferred model.

As admissions go, this was minimalist. The royal commission has already produced evidence that a company called Winslow Constructors paid about $38,000 to the AWU in 2005 for the union dues of about 105 employees, when Shorten was still AWU secretary.

Industry sources say such arrangements in civil construction were mostly done with the knowledge of employees, with the individual workers receiving union tickets.

What is more troubling is the case of Cleanevent, a cleaning company which paid the AWU an annual “service fee” of $25,000, while the workers were stuck on an agreement that did not include penalty rates and saved the employer about $2 million a year.

The commission has heard the AWU and Cleanevent had a memorandum of understanding which extended a substandard deal struck in 2006 during the WorkChoices era, and that many cleaners did not know they were listed as members of the union.

So far, most blame for the Cleanevent deal has fallen on Shorten’s successor as AWU Victorian secretary, Cesar Melhem, who is now a Victorian Labor MP.

Shorten became Victorian AWU secretary in 1998 and national secretary in 2001. He held both roles until 2006 when Melhem took over the Victorian position. Shorten stayed in the national job until entering Federal parliament in 2007.

In his interview on Sunday, Shorten set his own benchmark for judging his record as a union leader, when asked if he had traded off pay to get more membership income and increase his power base with the union movement and the ALP.

Shorten replied: “That is not true. And I’ve … never ever not put the interests of members first and I’ve got a record of working in the union that does it.”

One irony in all of this is that Shorten is being pursued for allegedly being too moderate, too pragmatic.

The Coalition usually argues that unions are too demanding and inflexible, and they can’t have it both ways.

For example, the Howard government’s former IR minister and enforcer, Peter Reith, has argued that Shorten must answer questions on his time as a union leader.

Fair enough. But as a Minister, Reith was himself involved with a $50,000 telephone bill, some of which was incurred by his son, along with the “children overboard” affair in 2001.

Personally, I would like to see Reith give a detailed and frank recounting of the Howard government’s involvement in the 1998 waterfront dispute.

I would also like to hear Prime Minister Tony Abbott make all details public on the “Australians for Honest Politics” trust established in 1998 which helped fund legal action to challenge the registration of the One Nation party. Like, who donated to the trust?

In office, the Abbott government’s attitude to disclosure and the right to know is often dismissive and extends well beyond “on water” operational matters.

But while the Coalition can be accused of hypocrisy, it will be Bill Shorten in the hot seat at the royal commission next month. His future as Labor leader is riding on it.

Shorten being ‘hunted for pragmatism, flexibility’