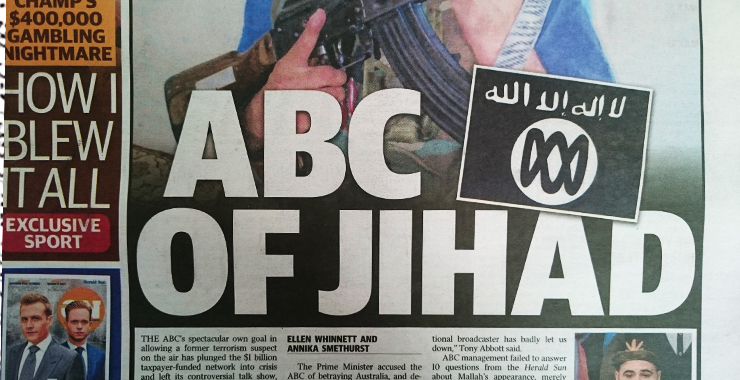 The morning after Tony Abbott and Malcolm Turnbull both slammed the ABC for giving air-time to former terror suspect Zaky Mallah, the national broadcaster awoke to a savaging from the News Corp press.

In a seemingly co-ordinated attack, The Courier Mail, The Daily Telegraph and the Herald Sun ran front pages attacking the ABC for Monday’s episode of Q&A which had terror suspect Zaky Mallah in the audience.

The three newspapers have a combined weekday audience of close to 800,000 readers, according to data from the Australian Audit Bureau of Circulations.

• ABC under siege from the left, right and within
• Q&A: Terrorism ‘should be retired’

Brisbane’s Courier-Mail ran with ‘It’s your ABC’ under a picture of a terrorists holding an Islamic State (ISIL) flag that had the ABC logo Photoshopped onto it.

The Daily Telegraph chose to put Mallah in an old school television set above the headline ‘Terror vision’ and the Herald Sun opted for Mallah with an ISIL flag containing the ABC logo and the headline ‘ABC of jihad’.

I thought this was a joke but no – this is the actual Courier Mail front page tomorrow. #MurdochIsATerrorist #AusPol pic.twitter.com/uuIrwF9dCo

On social media there was sympathy for retail giant Myer, which has invested in front page adervertisements on some of the highest circulating newspapers in the country.

Take a look for yourself. Have these headlines gone too far?