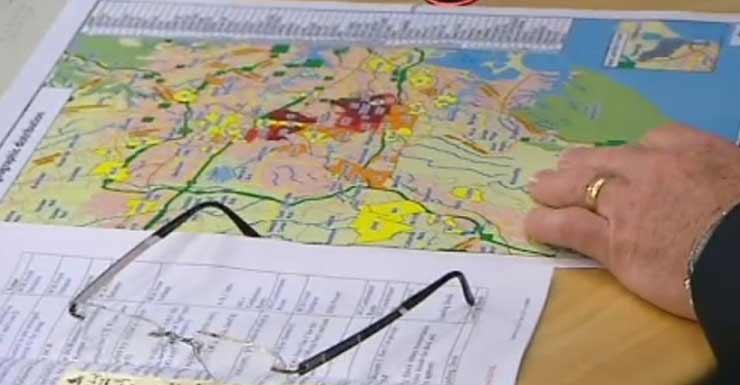 Labor is demanding Prime Minister Tony Abbott explain how official documents showing terrorist-recruiting hotspots in Melbourne and Sydney were allowed to be filmed during his visit to ASIO’s headquarters yesterday.

ASIO has confirmed that the maps – showing which suburbs foreign fighters who have gone to the Middle East came from – were not meant to be made public.

Maps laid out on a table for Mr Abbott showed highlighted suburbs in Sydney including Lidcombe, Greenacre, Punchbowl, Bankstown, Auburn and Lakemba.

The suburbs highlighted in Melbourne included Craigieburn and Campbellfield.

The Opposition says their publication may threaten Australia’s national security.

However, a spokesman for Mr Abbott said the Director-General of Security, Duncan Lewis, is “satisfied that no information of national security significance was visible while media representatives were present”.

In a statement, ASIO said the documents used in the briefing were “not the subject of a national security classification”.

“The documents were carefully edited and were unclassified. The content of the documents did not compromise national security,” the statement said.

The maps were shown as Mr Lewis gave Mr Abbott an update on the security situation in Iraq and Syria during a briefing inside the agency’s new headquarters in Canberra.

Television and newspaper cameras were allowed in for part of the meeting.

“This is a map which shows the two cities of Melbourne and Sydney, where fighters who’ve gone off to the Middle East have emanated from, the home addresses if you like,” Mr Lewis said.

“Not surprisingly you see a concentration down here and up here in Melbourne, and then to the west of the city of Sydney over here,” the ASIO boss explained as he pointed to highlighted sections of the cities.

“The Prime Minister must immediately clarify whether these documents were for official use only,” he said.

Earlier in the day, an ASIO spokesman told the ABC the documents were intended for “official use only”, meaning they were not meant for publication.

Mr Lewis also explained to Mr Abbott the maps would be used to direct the spy agency’s counter-radicalisation efforts.

“The number away still remains around 120, and the number here supporting them is around about 160,” Mr Lewis said.