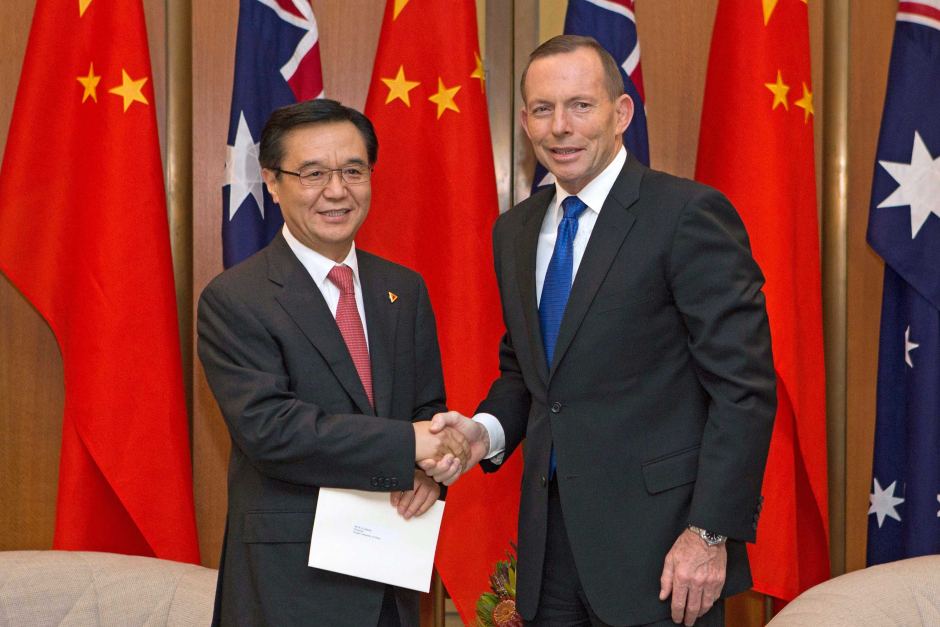 Australia and China have signed the long-awaited free trade deal, an agreement that will supply China’s wealthy and growing middle class with quality beef and wine, enriching Australian producers.

There’ll be better access for Chinese investment in Australia. As well, Australia will eliminate the final five per cent tariff on Chinese imports – meaning cheaper cars, electronics and whitegoods for Australian consumers.

“I trust that today our Chinese friends will enjoy the fine beef and the good wine that will soon be more readily enjoyed by their countrymen,” he said.

The agreement – termed ChAFTA – will ensure 85 per cent of all Australian exports will enter China tariff-free, rising to 93 per cent within four years and 95 per cent when it is in full force.

First off the mark could be Australia’s cattle producers. Agriculture minister Barnaby Joyce said exports of live cattle could happen in the near future.

The deal – instigated a decade ago under prime minister John Howard – was signed by Trade Minister Andrew Robb and visiting Chinese commerce minister Gao Hucheng at a ceremony in Canberra on Wednesday. It was then tabled in parliament, but isn’t a done deal yet.

Parliament will need to pass legislation and there’ll be comprehensive scrutiny by both the parliamentary treaties committee and the Senate foreign affairs, defence and trade committee.

Labor is concerned that temporary visas for Chinese workers could be used to bypass local workers and that some clauses allow companies to sue the government over any laws that hurt their profits.

“Any provisions on labour mobility must enhance, not constrain, job opportunities for Australians,” he said.

Mr Robb said this deal was as good as any deal China had signed with any of its trading partners and better than most.

Mr Robb said this was happening now, not decades into the future.

“We have got to grasp it while we can and ChAFTA is going to give us … first mover advantage in many areas, especially in services,” he said.