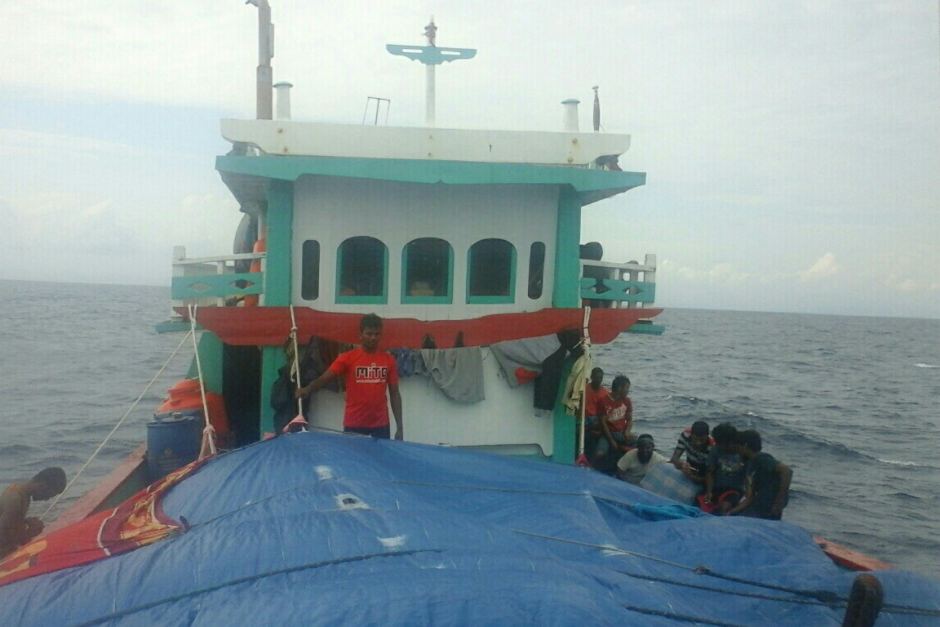 Asylum seekers from a boat whose crew was allegedly paid thousands of dollars by Australian authorities to return to Indonesia have questioned why they were intercepted in international waters.

The claims came as the ABC obtained images showing the moment Australian authorities intercepted the boat.

Two asylum seekers from the boat, who were able to speak a mixture of English and Bahasa Indonesia, say their global positioning system (GPS) showed they were in Indonesian waters when they were intercepted and turned around by Australian Customs and the Navy.

Abdul Maliq Mollah, the only Rohingya passenger among the 65 asylum seekers on board, wants to know why.

“I want to question something — we were at international route, we were not in Indonesia nor in Australian territory … why did they arrest us?” Mr Mollah told ABC News.

He said they were not trying to get to Australia, yet they were prevented from continuing on.

“We were in international waters, heading to New Zealand, that’s not Indonesian waters nor Australian. Why did Australia capture us?” he said.

Another passenger, 28-year-old Bangladeshi Nazmul Hassan, said Australian Customs warned them not to try to enter Australia or to get to New Zealand through Indonesian waters.

But he said the boat’s captain showed him on a GPS device that they were in international waters.

The men say they were taken to waters just off the coast of some Australian islands, which the Indonesian police have identified as Ashmore Islands.

“We [could] see Australian land, close, it’s close, say if we swam there, for an hour we can reach the land,” Mr Mollah said.

“[It was] close enough we even could see people on that land.”

Police in Indonesia said they have interviewed six witnesses, as well as the captain and crew of the boat.

They said the witnesses told them the crew of the boat was paid by an Australian official to return the asylum seekers to Indonesia.

The asylum seekers were then transferred to different boats and turned back.

One of the boats then ran out of petrol, ran aground on a reef and had to be rescued by local villagers.

Greens leader Richard Di Natale asked Senator Brandis in Question Time what evidence he had to support his assertion.

“Can he produce it, and can he provide an account of what actually happened, of whether bribes were paid, when they were paid, and to who they paid?” Senator Di Natale said.

It provoked an angry response from the Attorney-General.

“With respect, that is an astonishing question,” Senator Brandis said.

“Senator Di Natale, do you know what that evidence is? The man is the captain of a people smuggling vessel!

“The man is a person engaged in earning his living from the misery of other human beings, and accepting a very large sum of money from it.

“If you don’t think that that is pretty compelling evidence that that particular man’s assertions and allegations shouldn’t at least be treated with scepticism, then Senator Di Natale, you must come from another planet.”

Labor senators also asked Senator Brandis to confirm or deny the claims, to which he replied the Government does not comment on operational matters.

Dutton argues documents should be withheld for security reasons

Shortly after the exchange, Assistant Immigration Minister Michaelia Cash tabled a letter responding to a Senate demand for information.

On Tuesday, the Greens moved a motion calling on the Government to table documents relating to alleged payments to people smugglers.

The letter from Immigration Minister Peter Dutton argued the documents should be withheld on the ground it could “cause damage to national security, defence, or international relations”.

“The documents relate to operational matters, which should not be disclosed,” Mr Dutton said.

“The release of this information … would undermine the tactical advantage of civil maritime surveillance assets over people smuggler.”

“[It] would undermine more generally the effectiveness of Border Protection Command assets.

“[It] would enable an exploitation of confidential methodology and processes used by the Australian Defence Force and Australian Customs and Border Protection vessels and assets.”

The Immigration Minister also claimed releasing the information would impact upon Australia’s relations with foreign states.

Boat allegedly paid to turn back ‘stopped in international waters’