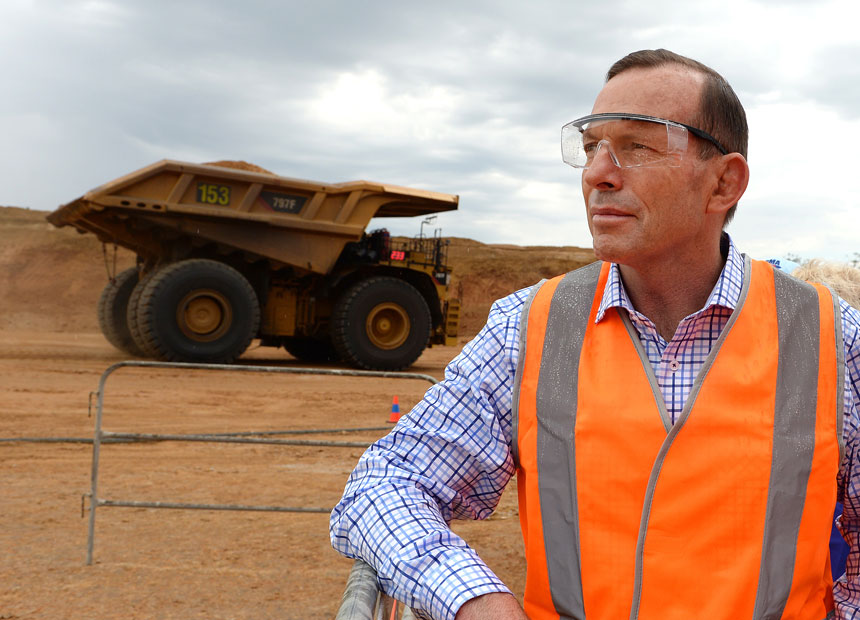 Australia’s regressive stance on climate change may be turning it into a global black sheep, but Prime Minister Tony Abbott is pushing on regardless.

And in an interview with shock jock Alan Jones on Thursday, Mr Abbott demonstrated just how deep his hostility to the cause goes.

He told Mr Jones that he opposes wind farms because they’re “visually awful” and “make a lot of noise”.

These aesthetic concerns are, in Mr Abbott’s view, more pressing than the potentially devastating effects of global warming.

Ideology and business do not go well together. To be able to run a successful business you need to be able to recognise a fact when you see one – and 95+ per cent consensus is as close to fact as science gets on such complex subjects.

That’s why you’d be hard pressed to find a genuine climate change denier among the senior executives of the ASX 200 listed companies.

However, these executives are also charged with protecting the interests of their shareholders; and if the government is introducing reforms that will hit the bottom line – such as the carbon tax – they will go out of their way to oppose those reforms. In other words, their opposition to climate action is pragmatic, not ideological.

But you can’t persuade the public on those grounds. Enter the ideologues.

Alan Jones, Ray Hadley, Andrew Bolt, Miranda Devine and the like have done a very good job of linking climate change to bongo-playing, weed-smoking hippy lefties. The hijacking of the climate change cause by this group has probably done it more harm than good, as it has played perfectly into the hands of the big polluters.

And judging by his comments, Tony Abbott is one of those who has bought into the shock jocks’ rhetoric.

But what about the business community?

Tabloid columnists and talkback radio hosts can get away with appealing to emotion and prejudice over facts. But the business press must be more sophisticated if it wants to stand up for the fossil fuel industry.

Unlike News Corp, Fairfax has generally taken a neutral stance on climate change. However, its business masthead The Australian Financial Review has come out in recent years as a cheerleader for the fossil fuel industry.

Last year the paper took a very firm editorial line on the fossil fuel divestment movement – it ran a series of articles attacking the Australian National University’s decision to divest from a number of mining companies.

It has also energetically stuck up the coal industry, which is coming under increasing pressure from institutional investors (see Jennifer Hewett’s columns, ‘Big miners must win over hearts and minds in fight against environment activists‘ and ‘Rhetoric and reality in power supply’).

Rather than colour climate change as a left-wing conspiracy, the Financial Review appeals to the economic reasons for protecting the coal industry. It highlights the world’s dependence on coal to generate power, its affordability, as well as things like employment and tax contributions – all of which are perfectly true, but only one side of the story.

The renewable energy sector is minuscule in comparison, and environmental activists are far more likely to read The Guardian or the Fairfax metros.

Why Abbott is one of a dying breed

Having a prime minister in office who already believes that “coal is good for humanity” is great news for the fossil fuel industry. It must be saving them millions in lobbying expenses.

But with the government of almost every other major economy getting serious about climate change, and with more and more institutional investors divesting from fossil fuels, prime ministers like Tony Abbott are a dying breed.