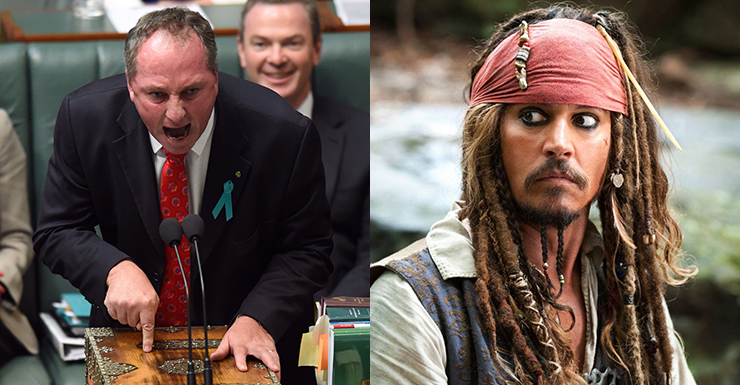 I make no apologies for my recent defence of Australia’s biosecurity system.

When it comes to protecting Australia from exotic pests and diseases it is imperative we remain vigilant and uncompromising in applying the same rules to everyone without exception.

Australia has some of the strictest biosecurity rules in the world and for good reason. Our human, animal and plant health rely on them to protect our unique way of life, environment and economy.

Recently, prominent film industry commentator Bobby Galinsky suggested in The New Daily that the actions the Department of Agriculture took in relation to the recent incident in Queensland involving Johnny Depp and his dogs were inappropriate.

Mr Galinsky is entitled to his views, but I reject his claim that because the film Mr Johnny Depp was working on (Pirates of the Caribbean 5) had a budget of $250 million we should have bent our rules that demanded that his dogs serve quarantine time in Australia.

Furthermore, Mr Galinsky argues that Mr Depp should have been treated as a special case.

This matter is under investigation and we are waiting on the results of that investigation. However, it is worth making the following general points about Australia’s biosecurity system:

• Tens of billions in agricultural productivity, along with the livelihoods of our farming families and rural communities rely on a strict biosecurity system.

• Dogs from overseas can pose a real risk to people and animal health. Diseases like rabies, ehrlichiosis, leishmaniasis and leptospirosis can be just as damaging to people as they are to other animals. Australia is one of only a handful of countries free of these diseases.

• The stay in a quarantine facility in Australia is the last step in a more-than-six month process of vaccinations, parasite treatments, blood testing and government health certification required to import a dog to Australia—that’s before it can even get on the plane. These are procedures that everyone who brings a dog into Australia has to comply with.

• We expect all those travelling to Australia to follow our laws and fill out the Incoming Passenger Card truthfully — it is a legal document. It asks whether people are carrying “animals, parts of animals, animal products including equipment, pet food, eggs, biologicals, specimens, birds, fish, insects, shells, bee products“.

It is also worth noting that my department actually worked closely with the same film company associated with Mr Depp to help it import its monkey ‘stars’ of the film.

That meant helping them find ways to meet our requirements—what we didn’t do is lower them. During that period the production company in question showed a genuine commitment to working with my department to meet our rules.

Mr Galinsky goes on to suggest that humans could potentially bring in more diseases than the dogs in question—well, he’s partially right.

Humans can certainly bring in harmful diseases. And every day we manage those risks accordingly, like our recent successful response to the Ebola virus with increased screening measures at our airports and ports.

But the threat of animal disease is very real and should not be understated.

If Foot and Mouth Disease established in Australia it would cost us more than $52 billion over ten years.

Protecting Australia’s biosecurity is a big and important job, and we don’t have the luxury of deciding when to apply the law.

Barnaby Joyce: why I let fly at Johnny Depp