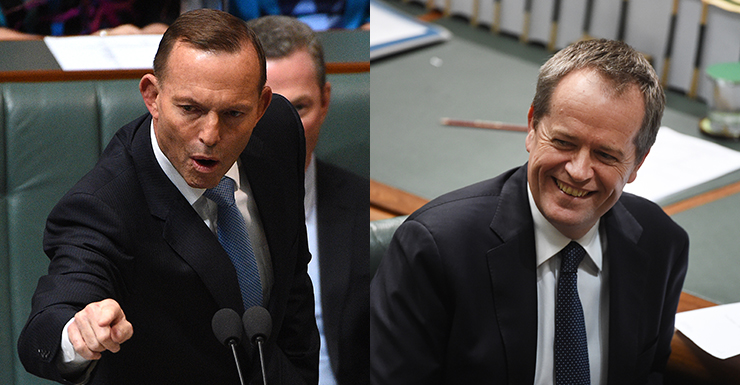 Opposition Leader Bill Shorten persisted with the introduction of his marriage equality legislation this week, in the full knowledge it would go nowhere once he introduced it to parliament.

Nevertheless, the Labor leader got the chance to say some fine words in support of gay marriage, and the Abbott Government got to denounce the move as a mere stunt by not bothering to turn up to listen.

The government’s sights were firmly trained elsewhere, not on love but on waging war, against those who wish to inflict terrorism on the good burghers of this great nation.

Despite not having released draft legislation to strip terrorists of their Australian citizenship, the PM pressured Labor to support the move and invited voters to infer that if the Opposition Leader didn’t support the anti-terrorism hawks in the Government then essentially he was a terrorism-sympathiser.

We saw what he did there

In fact the Prime Minister set about ensuring that anyone with doubts about the proposal would be seen as lily-livered anti-patriots; even his own ministers.

The PM encouraged the perception that Cabinet ministers who’d expressed concerns about the citizenship-stripping were weak on terror.

Following receipt of a letter signed by more than 40 backbenchers, urging him to hold the line against the ministers, the PM reportedly responded in kind by encouraging the MPs to “actively participate in the public consultation process” because “the support of the party room for a strong national security policy is really important”. Yes, he actually underlined “really”.

The leadership dimension of this little vignette is that Government backbenchers who agitated against Mr Abbott in February have backed him on national security against two of the leadership contenders – Foreign Minister Julie Bishop and Communication Minister Malcolm Turnbull. Social Security Minister Scott Morrison took the PM’s side, and laid claim to having come up with the citizenship cancellation proposal in the first place.

Whatever the reason the Cabinet citizenship barney was leaked to the media in the first place, it has strengthened the PM’s position and likely settled the leadership issue until the next federal election.

There were more zingers and half-baked slogans flying around this week than at a support group for advertising industry rejects.

The Cabinet apparently had a “come to Jesus” moment after the PM threatened personal and political consequences for ministers who leaked information from the meetings.

What this meant exactly was never explained, nor was there mention of what would happen to those who leaked Cabinet decisions to the Daily Telegraph even before the decision had taken place.

Mr Turnbull, no doubt smarting from the suggestion he was defying the will of the backbench, noted “some people like to suggest that some people are tougher on terrorism or tougher on national security than others” but warned the fight against terrorism was “not a bravado issue” and that letting the majority do what they want was not democracy but tyranny.

However, the line that will undoubtedly have the most impact with voters is the one deployed by the PM countless times this week as he hammered home his national security advantage.

In justification of the Government’s move to potentially render a person completely stateless, Mr Abbott chanted: “Anyone who raises a gun or a knife to an Australian because of who we are has utterly forfeited any right to be considered one of us.” A special mention should be made of the attempted zinger by Labor shadow minister Tony Burke, who called Attorney-General George Brandis a “turnstile of incompetence” for taking so long to let the parliament know the letter from the Sydney Siege gunman was not actually provided to the NSW inquiry. The analogy was clunky, but somehow still evocative.

Finally, spare a thought for the poor staffer from the Prime Minister’s office who somehow managed to miss the giant “Reject” sign the PM was forced to walk past on the way to his latest media opportunity. Scouting for media-friendly venues has got to be one of the toughest jobs in the business.